It is so sad to read of the death of the great Nicholas Parsons. He has dominated tv and radio for all my life- I remember “sale of the Century” and the “Benny Hill show” with affection when I was little and more recently, I cannot think of a weekend without a fix of “Just a minute”, even doing catch-ups in Moscow and Athens (though Gyles Brandreth took over at least once this summer- he did well, but it was not quite the same, was it?). But, most of all, I also greatly appreciate the fact that he bothered to write to me once about my hero, Edward Lear. He was, indeed, often the person of choice to recite limericks  on the radio and the tv – and his “Owl and the Pussycat” was excellent. With his passing, Lear-o-philes will be the poorer.

I also remember seeing him on stage in the “Rocky Horror” but, particularly, as the narrator in “Into the woods”, popping up at the end of act 1 with a daisy head-dress. I am about to do a programme on radio Fubar about rap and his opening of the Sondheim piece (along with the witch’s rap about vegetables of course) must qualify. It was a brave piece to do and he brought it off with aplomb.

I am not sure anyone has mentioned his Dr Who appearance as a vicar? Or that he took over from Tim Brooke Taylor as rector of St Andrews, my first university? What a wonderful man! Much to be missed.

Here I am in Dilijan, looking out over the mountains of Armenia! It reminds me alot of Albania and, indeed, I came across a map today which seems to confuse the two places precisely: here it is-

The Dong with the Luminous Nose

In Lear’s poem, “the Dong with the Luminous nose”, I realise there is an interesting omission. Lear must have intended, in some way, a play on the doorbell-sound “ding dong” so the natural consort of the Dong must then by rights be the “Ding”.

Sadly, the Dong has other interests and pursues a Jumbly girl.

There is more to this though, because Kant would go on with expressions like “Ding an sich” the thing in itself, so Dong has a much deeper meaning in the Germanic/english world. Kant would talk about the thing in itself as opposed to its actual appearance, “Erscheinungen,” what we see with our senses, something Plato would no doubt regard with suspicion. Lear’s Dong has clearly lost its “Ding an sich” and the light on his augmented nose simply illuminates the physical world and fails to get to the nitty-gritty, the thing in itself, whether this be the Jumbly girl he seeks or the missing Ding he does not know he has lost. The Dong therefore, confused by his senses is doomed to wander forever, weeping into the night. 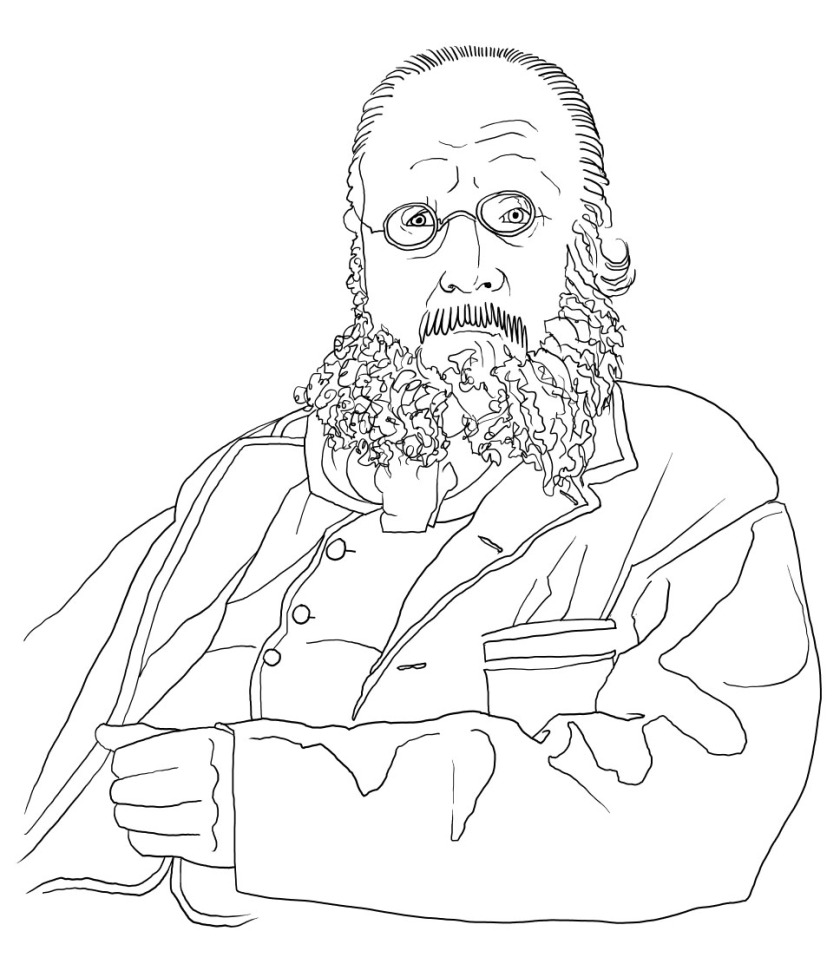 For luminous nose, read “numinous lose” or numinous loss- where the numinous is the spiritual- so, the Dong has lost his soul. He cannot see beyond the end of his own nose. that is a theme that reappears in the original 1964 “Mary Poppins” and leads up to Disney’s beloved song, “Feed the Birds”. 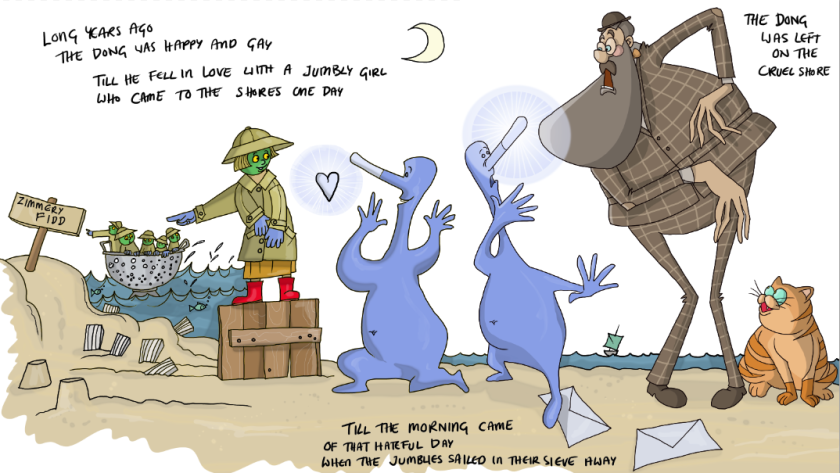 Jane: An outing with father?

Michael: I don’t believe it!

Jane: He’s never taken us on an outing before.

Jane, Mary Poppins: However did you manage it?

Jane: You must have put the idea in his head somehow.

Mary Poppins: What an impertinent thing to say! Me, putting ideas into people’s heads? Really!

Jane: Where’s he taking us?

Mary Poppins: To the bank.

Jane: Oh Michael, the city! We’ll see all the sights and father can point them out to us!

Mary Poppins: Well, most things he can. Sometimes a person we love, through no fault of their own, can’t see past the end of his nose. 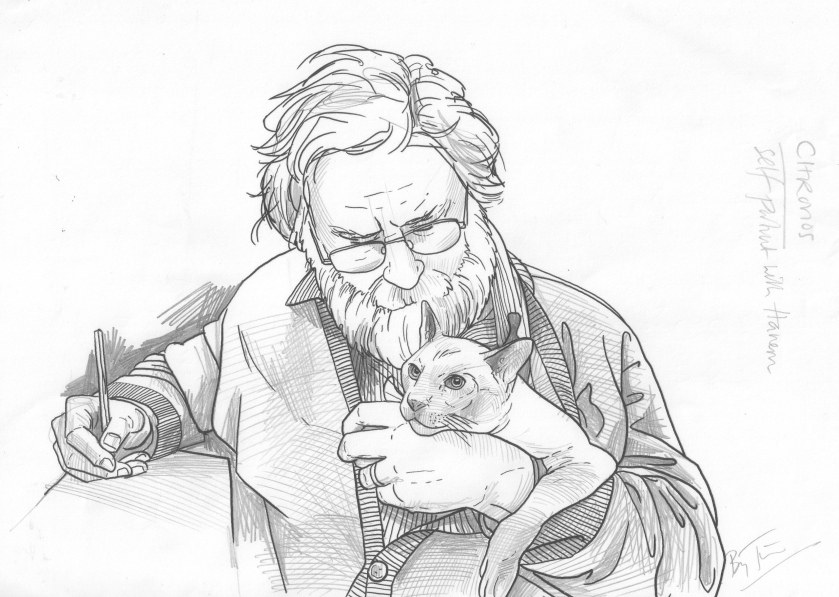 When she was small, Hanim had a fairly major illness and took refuge in my dressing gown pocket. Now she is much older and a bit unstable, she has taken to snuggling into my cardigan. It is not always convenient. This evening, I was drawing some stuff for the FOLLOWING LEAR project, and, instead, ended up drawing Hanim. She has such intelligent eyes.

Some thoughts about our “Following Lear” programme. Here is a poster

I have been drawing the opening sequence for my documentary about Edward Lear, “Following Lear”. Here is the latest version with some detail:

It is a complex scene featuring a swing in a music hall. 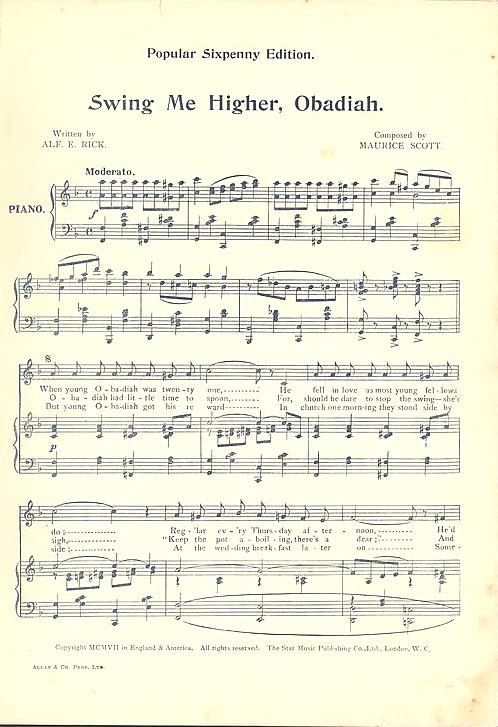 One of my early memories of watching black and white tv was of a girl on a swing in “the Good Old Days”. I think that swing was brought out on a number of occasions actually, and at least once, in the 25th Anniversay season, Les Dawson was strapped to it in drag. It was generally there for the song “Swing me just a little bit higher, Obadiah do”. It made a lyric loaded with innuendo seem homely and very jolly.

The music hall was full of daring routines and “the Good Old days” captured some of that spirit throwing acrobats and trapeze artistes directly into the auditorium. In the mid 19th Century, there was a craze for tightrope walking over the heads of the audience. Brilliant! I wonder how often there were accidents?

One of the early films made by Dame Joan Collins in 1955 was about Evelyn Nesbit Thaw, tied up in a messy muder trial and called “the Girl in the red velvet swing”. Of course, at a time when she was dazzling in BA and Cinzano adverts, she went on to make a slightly more scandalous film featuring an aquatic swing that arguably re-ignited her career, was based on a book by her sister Jackie, and somewhat incongruously, propelled her as staple fodder for family viewing in nearly a decade of “Dynasty”. What seemed very daring in the “Stud” and the “Bitch”, however, would today seem tame, and the thought of an A- grade star like Joan Collins getting involved in such stuff would no longer raise an eyebrow, particularly after Gielgud, Helen Mirren and O’Toole romped through “Caligula” at the end of the 80s.

I like the “Girl in the Red Velvet swing” though; it treats the subjects rather better than the subsequent film “Ragtime” which is both pedestrian and laboured. The publicity photos for La Collins, moreoever, are a treat. They are even better than the movie! Doesn’t she look radiant!

There is also a swing scene, though fairly modest in “the Boyfriend”, designed by Tony Walton and a great scene in an early Angela Lansbury film,”Till the Clouds roll by” .

I think I have now looked at almost all the swings in the movies! 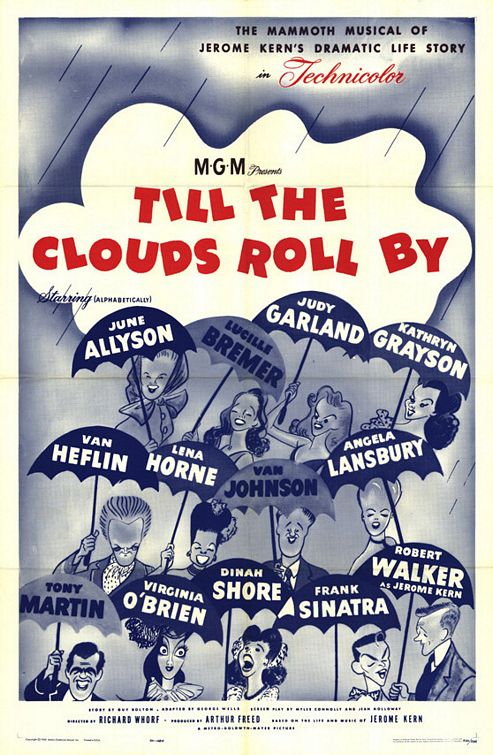 The problem with swings is that every single frame represents a change in perspective- a nighmare for 2d drawing and I have had a few attempts so far. I am quietly pleased with the lastest effortwhich I will work on over the next month.

The music is by David Watson and the song is sung by Thomasin Tresize. If the spirit of the animation is a bit racy, I suppose that is to do with Joan Collins as much as with the hint of naughtiness that Tom suggests as she sings it!

I think it is meditative of course…. I tried to time the swing to the bars of music and it looks too premeditated- a bit like an early Mickey Mouse film. The idea of timing animation to hit the beat gave the whole screen animation/ music industry a very bad name, and it is bizarre that this was taking place at exactly the same time that Astaire was developing his technique of dancing OFF the beat. It’s when the dancer hits the beat at a specific moment that the magic happens. So the swinging motion is now independent of the beat (just). 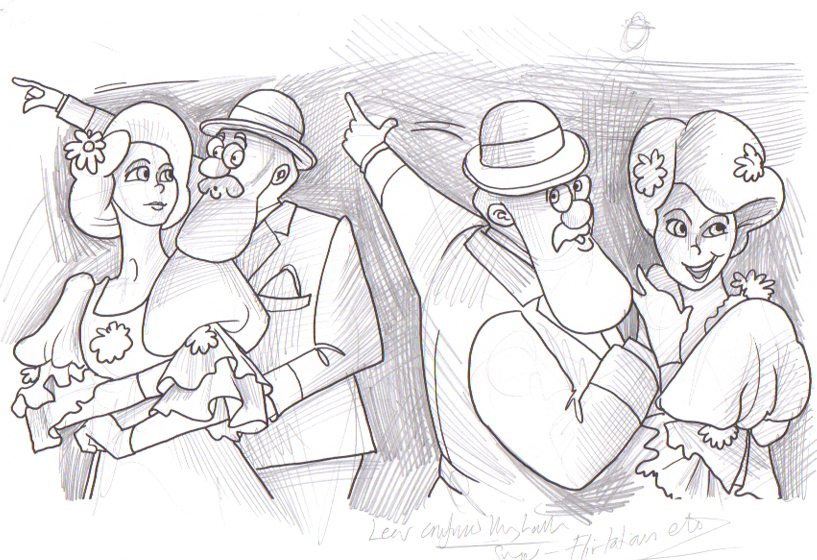 and here is an early sketch:

Ilir Meta, elected President in April. While elected by a majority, the Presidential election was marred by a continued effort on the part of the Opposition to disrupt the parliamentary process. That said, Meta was as much connected to the Democratic party as he was to the Socialists, and arguably, now he is out of the running for parliamentary jobs, he is no longer a serious opponent for Edi Rama. 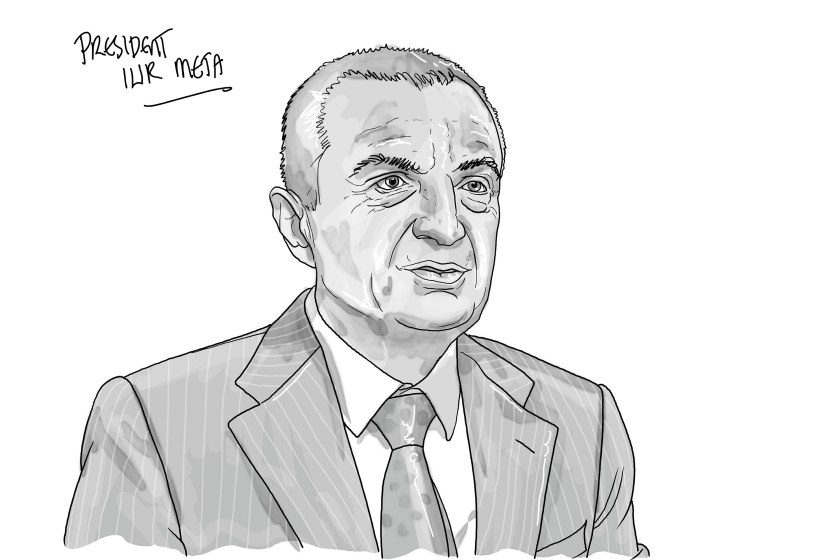 Here is a view of the Ottoman bridge in Tirana:

I was asked to do some videos to help with phonetics in Moscow. Here are the first two: 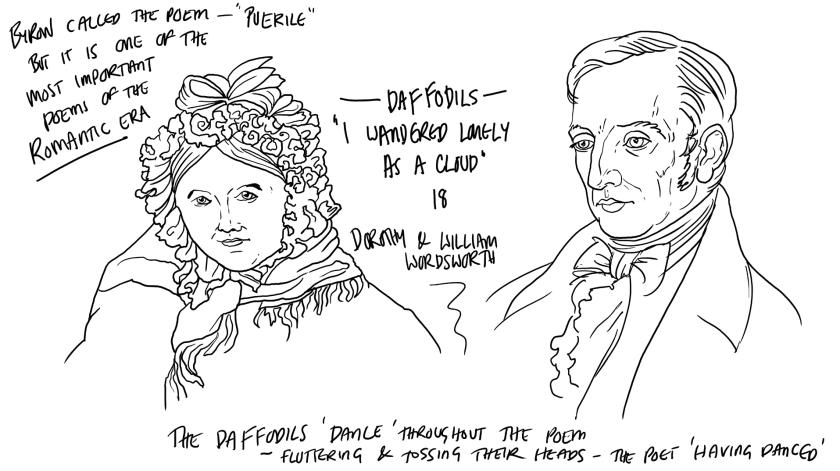 I am just finishing the final sequences of a youtube treatment of the Lear Suite by DAVID WATSON. It should be ready in the next few days for posting!

Meanwhile, here is a recent review of Episode 2 of “British History’s Biggest Fibs”:

Columnist James Waller-Davies gives his view of some of the recent events on television. This column is the most read television column in the entire English speaking world. It’s true. Friendly Russian hackers have leaked the news from a Moldovan website and it’s important this information is shared with you. Yes, it’s ‘fake news’ season. The whole world is gazing, like Alice, into a topsy-turvy looking glass of the make believe. Orwell’s ‘doublespeak’ is topping the book charts again and nothing, it seems, is believable. It is nothing new according to British History’s Biggest Fibs with Lucy Worsley (BBC4). Worsley’s entertaining and informative revision of some the biggest myths of British history is a timely reminder that there’s nothing new about ‘fake news’ – the state, our state, has been up to it for centuries. This week’s topic was the Glorious Revolution of 1688, when Britons cheered the arrival of a new king and queen, William and Mary, from over the channel in what is now the Netherlands. But as Worsley reminds us, that’s a great big lie – it was, in fact, an armed invasion incited by a band of English traitors and an example of ‘fake new’, seventeenth century style. Worsley is a refreshing change to history programming, which in recent years has been overly dumbed down and ruined by soft focus re-enactments and mockumentary dramatisations. That’s not to say Worsley isn’t beyond a bit self-parody and fancy-dress herself, but she is a reminder that an expert, talking engagingly and enthusiastically can be entertaining enough.