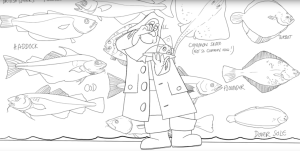 Cornish fishermen have hit local and national press twice in the last few weeks. Blue fin tuna, worth millions of pounds, spotted off the Cornish coast and a Newlyn Trawler, forced to throw back its accidental 10 tonne haul of spurdog shark because of EU legislation. This is good news for our fishermen in one sense, as it highlights the frustration they face on a daily basis, forced to comply with an impractical ‘tangled net’ of restrictions, currently imposed on the UK. 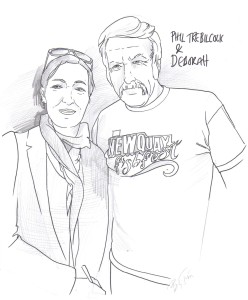 Paul Trebilcock, Chief Executive of CFPO (The Cornish Fish Producers’s Organisation), is especially concerned with zero TAC’s on spurdog, introduced by the EU in 2010 because of stock status fears. 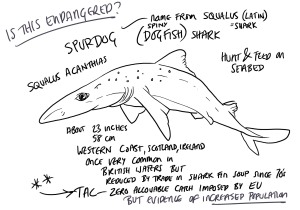 A discard ban, in force since January 2015, now obliges fishermen to land by-catches of saleable fish in excess of quota to help preserve and maintain a viable economy. As regulation allows quotas to be sold, leased and exchanged between fishermen, this is a welcome step in the right direction for the industry. Past preservation measures and successful resting mean many stocks are now flourishing. The new EU parliamentary rule is to take effect in stages from now until 2019. This ruling, however, does not apply to species with zero TAC’s, including those considered to be endangered, such as spurdog. Paul said “This is a waste of a perfectly good food resource clearly not in line with CFP principles.” He added: “There is no question in my mind that spurdog populations are increasing throughout Western Approaches and beyond.” Together with scientific agency CEFAS and DEFRA (Department for Food & Rural Affairs), Paul and his team are hoping to address this issue with a pilot project using a real time reporting system. This will enable the fishermen to document an increasing number of spurdog accidently caught and provide scientists with the evidence necessary to a land a limited amount of a dead marketable resource without incentivising targeting stock.

THis is not a “FISHERMAN’S TALE”

Skipper, Phil Trebilcock, is certain there is “no short supply of spurdog” (recorded in his logbook). “A recent haul in Newlyn had to get a crane to lift it out as the drum couldn’t take the weight. Good quality, healthy fish, ending up as crab bait. It’s a shame there wasn’t live TV coverage so the public can see what’s out there too.” Spurdog breed fast. They eat mackerel, pilchards and anchovies, heavy in Cornish coastal areas, so it’s no surprise the fish appear to be flourishing. Phil estimates that with a reasonable quota it could be sold at £1.00 a kilo. “Enough for a decent income for Cornish fishermen.” The fourth generation mariner is adamant our men would “fish sensibly” and give it adequate resting time to replenish stocks, as they do with other fish. The skipper firmly believes there “should be regional management of quotas.”

Ben Eglington said: “We are jumping through a lot of hoops, really struggling. One of the problems with our quotas is weather; it governs how we catch. If conditions are good for a certain fish, and we’ve already reached our quota, there’s nothing we can do. We are throwing money away, over the side of the boat, and that’s just daft.” Ben, 27, is among the minority of young fishermen in Britain today (average age around 50) Most have to take second jobs in order to earn a living. “Hardly any young people are going into the industry anymore. Their families are advising them not to. So there will be a shortage of fisherman here in the future.” 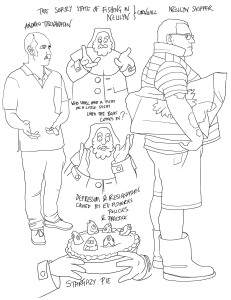 Tension with regulation is the same at Mevagissey Harbour. Andrew Trevaraton said: “Last year we had to throw away 2,400 haddock, most of it dead, as we were out targeting lemon soul. Afterwards, one of our other boats went out with CEFAS to show them how many there are and caught ¾ of a tonne in just an hour and a half. Our monthly quota for haddock is only 250 kilos and there are thousands of tonnes of it in the Cornish Coast. Smaller boats, restricted by weather, don’t need to be travelling hundreds of miles away when resources are here on our doorstep.”

Fishing since the age of 5, William Shugg, agrees with Andrew. “Haddock is a big problem here. Three years ago our monthly quota was 4 tonnes. Last week I caught 200 kilos in one day. Before that, 600 in a day; more than double the quota. I sent a message to DEFRA about this problem but had no reply. Without complicated rules our jobs would be so much easier. The industry allows us to sell and swap quotas but this is time consuming and not always possible. Earning a living is extremely hard. Fluctuating prices for some fish, like mackerel, can go from 20p a kilo to as high as £6.00. We can’t budget which is why most fishermen have second jobs.” When asked about spurdog, he said: “We see it all the time. My friend had a substantial by-catch recently in Falmouth Bay. It’s also here in Meva but we have to throw it back.” Echoing the words of Phil Trebilcock, William concluded: “Fisherman should be able to govern quotas themselves. Swap and help each other with regional committees. It would be much fairer system.”

Described as “hardy and resilient” by James Incledon, of channel 4’s popular documentary, The Catch, fishermen at one of the UK’s largest marine ports are equally tied up in bureaucratic knots. Beam trawler Skipper, Sean Porter said: “We are one of the richest fishing grounds in this country and MP’s are not doing enough. Until the day one of them actually owns a boat, we’ll forever be speaking a different language. Ministers should be appointed with expert knowledge in their fields. It’s like having a Minister of brain surgery with no medical training.” Sean said that when one of the European Ministers visited the harbour, he was shocked to learn they “steam out non stop with up to seven hauls a day.” The skipper said this was yet another example of why we shouldn’t be dictated to by Brussels. “CEFAS only come out on each of the boats twice a year.”

There are numerous species the Newlyn fishermen can target when quotas for certain fish are low so they are more fortunate in this aspect. Not so fortunate though if the men find themselves temporarily out of work due to injuries. “If we can’t go out, we don’t get paid and the benefit system doesn’t look after us like they do in France. We are treated like second class citizens here. I spent nearly three months without any pay once. The French wouldn’t put up with that.” Surprisingly, the ‘resilient’ skipper hasn’t lost his sense of humour. “I said to officials that with all the extra paperwork we’re having to do every day, they can go out and buy me a size 26 blouse and skirt and pair of high heels, because if I’m going to be a secretary I may as well dress like one.”

Steven Sately (nicknamed ‘Cod’) said: “Quotas don’t work with mixed fisheries like Newlyn. And changing quotas every month makes things worse. The people who make the rules don’t even know the rules themselves half the time. There is enough fish out there for everyone if it was worked out carefully. But in this country we are dependent on DEFRA to do this for us. ”

Retired fisherman, Richard Ede, left the industry ten years ago as he’d “had enough” of the “out of touch with reality rules imposed by the CFP.” Richard said: “We sacrificed an industry back in 1973 (when Britain entered the EU). The UK has a habit of doing things to the letter, and beyond, much to the detriment of our nation. Quotas are not a major concern for those with stronger fleet duration. Policy makers shouldn’t sell away resources to the highest bidder. A lot of fish is caught by huge foreign trawlers before it is even fully grown. It is no wonder stocks are dwindling. Before the seventies, when we had control of a 200 nautical mile radius of the waters around Britain things were very different. We should turn the clock back and become the guardians of our seas again.” Richard cites Norway as an example of a how a self regulating fishing industry thrives by managing its own stocks.” In his opinion, the CFP is fundamentally flawed as it limits landings, not the catch, therefore “not protecting stocks.” He said: “It is a scandalous waste of resources, money and labour.”

Cornish MP and Minister of DEFRA, George Eustice said: “The marine environment is incredibly complex. No man-made policy designed to manage it and deliver sustainable fisheries will ever be perfect. The science will never be perfect.”

“If we want sustainable fisheries, there is no alternative but to have some kind of catch limits on vessels and some kind of quota system. Whether we are in or out of the CFP we would have that quota system, just as Norway, the Faroe Islands and other states pursue catch limits. And we would still have arguments with other countries about allocation of fish stocks and seek reciprocal access arrangements.”

The Fisheries Minister said: “We should all pay tribute to the great work of my predecessor in this post.” (Richard Benyon) “Who I believe made some important breakthroughs on reform of the Common Fisheries Policy.”

“Even I, a strong Eurosceptic, recognise that good progress was made on CFP reform.”

Cornish fishermen have no argument that catch limits and quotas are required. After all, it is in their interest to preserve stocks for the industry to survive. They will argue, however, that policy made in Brussels is giving them an unfair deal. The new Landing Obligation will go some way to rectify this but still unclear as to how much fish will be wasted on dry land. With a growing population and a record number of people relying on food banks this is simply an unacceptable practise. As a traditional, sea-fairing nation, we need to do all we can to support these hard working men, out there day and night in dangerous conditions, so that we can enjoy what ends up on our plates.

Sanjay Kumar, founder of School of Cornish Sardines and major supporter of the UK fishing industry, agrees that quotas need to be re-distributed according to natural resource of artisanal fishermen. He said: “It is the fisherman who is the endangered species, not the fish.”

Captain Cod is part of the “BETTER OFF OUT” campaign and a mascot for our endangered Fishing fleet.