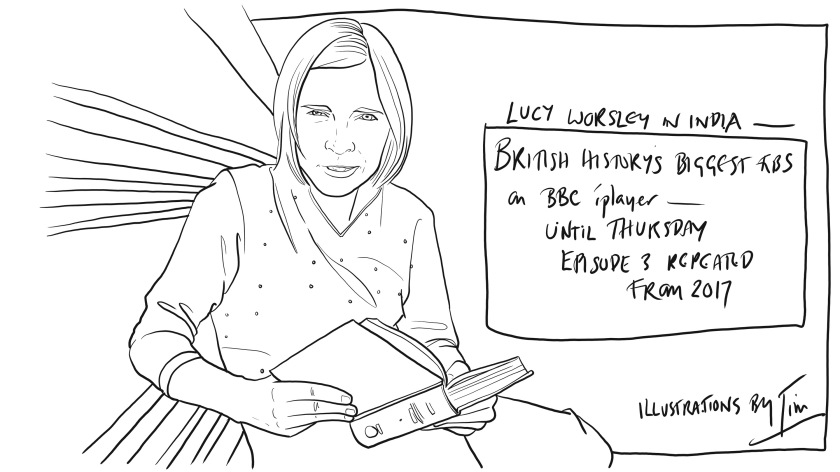 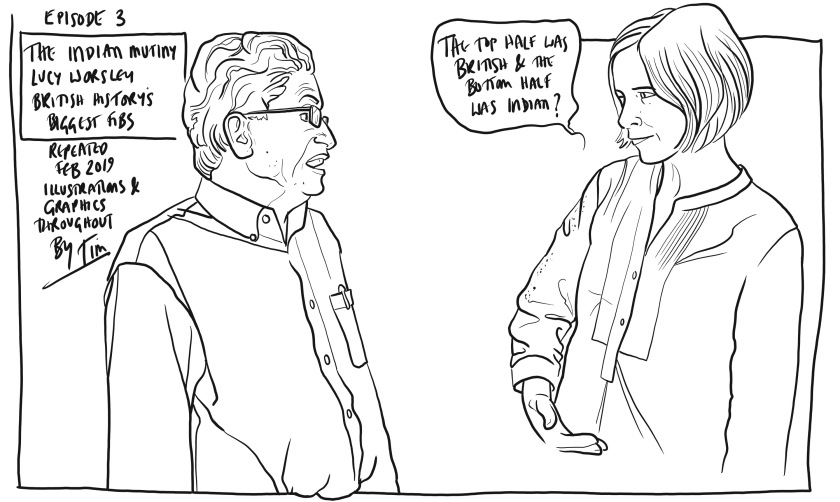 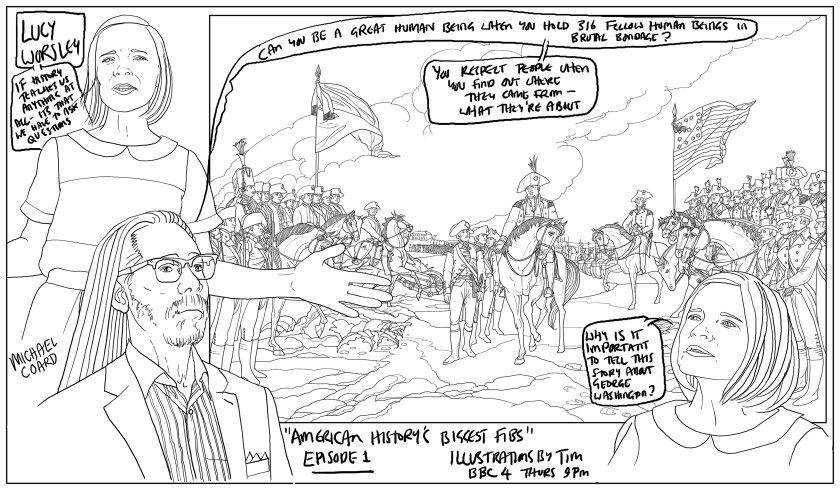 First episode of Lucy Worsley’s new programme screened tonight. Very pleased to have done the illustrations and animation throughout. This is a picture with a few images and quotes that I drew watching the broadcast.

Congratulations to Lucy Worsley on her award! A new series of “Biggest fibs”, for which I have again done some animation and illustration throughout, is due to screen in January and I think is even better than “British History’s biggest fibs”.

Meanwhile the last episode of “Inside the tower of London” airs this sunday on Channel 5. Again I did illustrations throughout.

Recently, Mary Beard gave a lecture which some of my friends attended. The report I received from them was rapturous – she was controversial and authoritative. Actually, she was more than that. She was right.

Recently, Professor Beard was attacked by AA Gill. It is part of the same story- that people can be judged today more for whether they conform than whether they have something important to say.

The two issues Professor Beard specifically raised in the Listener talk were the abuse she suffered when her presentation in “CIVILIZATIONS” was cut when it was broadcast in the US, and the second was to make a firm stand against re-enactments or recreations in History documentaries. These are all over the internet, and particularly noticeable on PBS.

It would, however, be wrong to suppose that America is only to blame.

I was once engaged by a UK company to play the part of Socrates for one such history documentary, so I know from the other side how silly and absurd such recreations can be. More than that, we were filming not in a genuinely Attic setting but in the 19th Century Zappeion, a bit of the modern Greek parliament complex built specifically to celebrate the first modern Olympic games in 1869. It looked pretty and it might have been appropriate in a hollywood “swords and sandals” epic, but it is not “history” and nor does it actually tell the viewer anything useful. The reason is simple- because it dodges the issue of interpretation. All art is interpretative but because live-action film feels like ‘reality”, that is exactly how the viewer accepts it. The viewer is plunged into a  magic realm and is the passive recipient of the director’s agendum. The viewer is a willing party to deceit.

Fine in a film like “Gladiator”, but not fine in a serious documentary about history. We need to know what is real and what is recreated.

This is frankly where my own work slots in: 2d animation can never masquerade as reality, but it can offer something more than “live-action recreation” to the documentary medium. If supported by the proper research, it can provide an insight into the way history has already interpreted events, much as quoting a specific writer as an authority can do. This is most beautifully illustrated by Richard Williams’ animated sequences in the CHARGE OF THE LIGHT BRIGADE.

Here, Williams shows us exactly how British newspapers peddled propaganda and half-truths to a gullible public, showing the glory of the empire in contrast to the gore and disaster that unfolded on the battlefield itself. The greatest moment is the Victory sequence which is brought to a sudden close by a canon firing. There was no victory- just a squalid collapse of authority and a chain of misunderstanding.

Williams’ animation tells us something valuable in its own right. And because we can never pretend what we are watching is anything other than a drawing, we cannot be bewitched into thinking that this is “reality”. But it might very well be a way to access Truth.

Because we often associate animation with Disney, we can get confused, but because 2d animation remains ostentatiously artificial, we can be sure we never forget that we are watching an interpretation. The Disney technique means we can do almost anything with animation that we could do with live-action. More maybe! Though it takes time.

Of course, I nurse a desire to bring the stories of Greek mythology to life through the red/ black figure images on greek vases- who would not immediately see the potential in this! But even more interesting would be to animate Flaxman’s illustrations for the Iliad and Odyssey which informed the way we have understood classical texts since the early 19th Century. His work led to the development of the blue and white jasperware that even today is in most of our houses. This is not about recreating or re-enacting events but about making a conscious decision to give us an insight into the way we now view these stories.

I am terribly proud of the work we did in the two Lucy Worsley programmes, the second of which is due to air in January- we used the device of turning the pages of a book, and of capturing images from framed pictures to comment, introduce and develop the ideas that were being presented.

When we forget that we are examining what people have said and recorded in the past, we simply enter a world of make-believe. It might be entertaining but it is not history.

Here is my scribble from watching it, though the drawing of Macaulay is not based on the image used in the programme…

I am just finishing the final sequences of a youtube treatment of the Lear Suite by DAVID WATSON. It should be ready in the next few days for posting!

Meanwhile, here is a recent review of Episode 2 of “British History’s Biggest Fibs”:

Columnist James Waller-Davies gives his view of some of the recent events on television. This column is the most read television column in the entire English speaking world. It’s true. Friendly Russian hackers have leaked the news from a Moldovan website and it’s important this information is shared with you. Yes, it’s ‘fake news’ season. The whole world is gazing, like Alice, into a topsy-turvy looking glass of the make believe. Orwell’s ‘doublespeak’ is topping the book charts again and nothing, it seems, is believable. It is nothing new according to British History’s Biggest Fibs with Lucy Worsley (BBC4). Worsley’s entertaining and informative revision of some the biggest myths of British history is a timely reminder that there’s nothing new about ‘fake news’ – the state, our state, has been up to it for centuries. This week’s topic was the Glorious Revolution of 1688, when Britons cheered the arrival of a new king and queen, William and Mary, from over the channel in what is now the Netherlands. But as Worsley reminds us, that’s a great big lie – it was, in fact, an armed invasion incited by a band of English traitors and an example of ‘fake new’, seventeenth century style. Worsley is a refreshing change to history programming, which in recent years has been overly dumbed down and ruined by soft focus re-enactments and mockumentary dramatisations. That’s not to say Worsley isn’t beyond a bit self-parody and fancy-dress herself, but she is a reminder that an expert, talking engagingly and enthusiastically can be entertaining enough.

I have just watched episode 2! Although I did numerous graphics for the show, I have never really watched any of the episodes from beginning to end, and what bits I had seen were often radically changed in the edit. This episode seemed to me to be very slick indeed and I was thrilled at the way my sequences were blended into the story. I was particularly pleased that the nosebleed sequence worked so well! So congratulations to Edmund Moriarty, the Director of this episode, for doing such a brilliant job and making the process of working such a pleasure!

This should be up on iplayer tomorrow!

Here’s another review and a few sketches I did

Well, as British History’s Biggest Fibs with Lucy Worsley, the historian and broadcaster’s latest jolly meander through the past, reminds us, history is there to be spoiled, in the sense that the events we think we know so well – so well, indeed, that they become mythologised – can still offer some revelations. This is exactly how the softly didactic Ms Worsley explains the Wars of the Roses, (and the glorious Revolution and the Indian Mutiny in later episodes). There is, you see, no such thing as a definitive account of anything in history, not even from Ms Worsley. So, there is plenty of fascination left in, say, Richard III, or “wicked King Wichard” as the learned Lucy styles him. This is as good as telly history gets.

Here are some sketches of the tremendous Lucy Worsley doing her stuff!

From the Daily Mail:

Long ago, when BBC1 was still a family channel that showed children’s programmes at lunchtime, there was a colourful animation about a character called Mr Benn.

Mr Benn loved dressing up. Every day he went to a fancy-dress shop, where he tried on a new costume — clown, wizard, astronaut, cowboy — and had an adventure, before returning to his mundane life in his suit and bowler hat.

I want to see a remake with Dr Lucy Worsley. No one since Mr Benn has enjoyed dressing up so much.

As long as she’s being Grown-up Lucy, in her smart dresses and severe blonde bob, she’s a scholarly and respectable presenter. But let her don a ruff or a bustle, and her eyes glitter with mischief.

British History’s Biggest Fibs (BBC4) saw her pull on a yeoman warder’s finery at the Tower of London.

The effect was as intoxicating for her as three swift glasses of white wine at the historians’ office party. Goodbye decorous Dr Worsley, hello Louche Lucy.

In the show, Dr Lucy tried to debunk mysteries of the Wars of the Roses – but it was confusing

Eyeing the chief Beefeater, she told him saucily: ‘I think I might have a better codpiece than you.’ And while the poor man was trying to think of an answer to that, she added: ‘Let’s discuss our chests.’ Evidently she likes a man in uniform.

When she wasn’t flirting with guardians of the Crown Jewels, she was debunking some of the myths of the Wars of the Roses.