No need to add much text here- I discovered last night that my RBS account has been accessed and money taken. Instead of proper service, however, I was transferred to a “fraud department”, treated to rudeness and evasion. I do not feel very reassured at all. But I have had an hour this morning to draw their boss:

What he says should give hope, and I have no doubt he means well, but he said this two years ago.

My heart sinks every time I realise I have to phone a call-centre. Today, I had two of these misery moments which extended much the way through the afternoon, and I was on the phone for about 4 hours in sum. I discovered, to begin with, that my mobile phone had stopped working. This is alarming because I rely on this strange object for work and for people who need to contact me. We live in a world where the home or business phone seems to be largely ignored and is the telephone of second choice for so many. (Not for me, incidentally: I find it so difficult trying to work out which end to press on the mobile and only recently had to abandon an iphone because it became too much to handle. And, you know, mobile phones with all the “swipe technology” fail to work completely in the rain. It is impossible to “swipe” anything then. I love buttons, knobs and dials. They are so more reliable) So, I called Virgin and finally discovered that my direct debit had not been paid and I had therefore been disconnected without notification. I have to add here that I am in the process of modifying my bank account in the RBS. It is what is called now a “partial transfer” because my last attempt at a bank switch was such a disaster I found unpaid bills for the next two or three months and netflix persecuted me for ages: I did not want this to happen again and was assured it would not. What I was not told was that over the course of three weeks, all my Direct Debits and Standing orders would go to the new account before any money was transferred. This frankly seems absurd. When I asked to speak to a manager, I was passed instead to another department which deals exclusively with “switching”. First I spoke to Sam who seemed earnest enough but did not have all the information to hand so I again asked for a manager. I shall not give her a name – after nearly an hour she agreed to transfer my money but began by insisting that the bank was within its rights to hold onto this cash until the end of June, and however much I asked for a date when she would transfer the money, she was unable to provide one. It seemed to me to be a matter of theft or embezzlement. I cannot see how a bank can possibly transfer bills to another account and retain the money that is supposed to be used to pay these bills. The story ends more positively because this lady eventually did the transfer herself and the new account now has money enough to deal with any further direct debits. It remains for me to chase up Southern Electricity, Petpal as well as the car insurance people to explain that they must present their Direct debit demands a second time. It is the mixture of arrogance and patronising tardiness of the RBS call centres that really annoys. It is summed up in the need for a series of increasingly infantile “security questions.” When I am left with unpaid bills and when it falls to me to chase after the companies that have not been paid and arrange payment through other channels, there is no security. When the RBS retains my money, there is no security. There is only the lingering whiff of corruption. 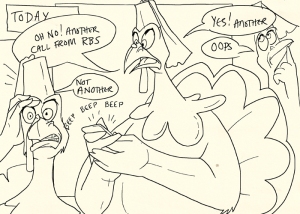 Now there is a bit more to this story that happened today: I was called by a man called Ronak, a charming courteous man from Tanzania, who had empathy and common sense. Indeed, we talked about so many things and really he had nothing positive to tell me at all- but his manner was spectacular. He could have been calling me to announce my execution and I would have been delighted! Really, he should be giving lessons to some of the twits that made me want to leave RBS in the first place! Anyway, we spoke for what seemed to be 20 mins but was in fact an hour, and, in the process, he explained that I had been completely misled because, specifically, in the case of a “partial switch” from one bank account to another, the banking rules dictated that the bank simply moved the direct debits and standing orders. In other words, it was up to me to transfer the money from my current account whatever else I had been led to expect by the people managing the new account. This is certainly not something I had been told by anyone, either over the counter a few weeks ago or on the phone, and most importantly, the various people I spoke to yesterday at RBS did not seem to know that they were not expected to move my money at all- a serious omission that including the “manager” at the “switching” site. Instead, they were working on the understanding that they could retain this money for another two or three weeks and said as much. Had I left this matter to them, I suppose, then the money would never have been transferred; it seems there is no automatic system to follow and no paperwork available to manage this. There is a paper-system for transferring money from savings accounts but not from a current account. That paper request for the “savings account” I have now received. Ronak thinks I have received very poor service and I agree entirely. He also thinks I should contact the Ombudsman and my MP to ensure that more people look at this issue because I am not the only one caught in this mess. Of course the new switching system works very well generally and scores a 80-90% success rate but here is an instance of the bit where it fails. The automated banking switch is modelled on the automated mechanism for the energy providing switch, which allows us to quickly move from one gas, electricity or water supplier to another and boost competition, and therefore improve the general quality of the service. It assumes that a customer will move completely from one (energy) system to another. Sadly, there are instance where the switch needs only to be partial, and this is acknowledged in the banking rubric, but the process of following that switching mechanism is not at all clear and each department blames the other when it inevitably goes wrong. If, perhaps, banks were staffed by people like Ronak rather than some of the arrogant twits who answer phones, if managers in banks were there to help customers rather than- as I am told, in the RBS, their only responsibility is to to manage their counter-staff- then maybe high street banking would be a reputable service again. Instead, it is simply set to become as dodgy, if not more dodgy than some of the worst mobile phone companies. I despair!