About extradition from the US: “I’ll be clear with you, the chances of America responding by sending Anne Sacoolas to this country are very low. That’s not what they do,”

About FLYBE: “It’s not for government to step in and save companies that simply run into trouble.People will understand that there are limits commercially to what a government can do to rescue any particular firm. But what we will do is ensure we have the regional connectivity that this country needs. That is part of our agenda of uniting and levelling up.”

Harry and Megan: absolutely confident they will manage “much more easily without running commentary from politicians”

The North: giving “people the chances to exploit their talents.”

Iran nuclear deal: “If we’re going to get rid of it, let’s replace it with the Trump deal. That’s what we need to see. President Trump is a great dealmaker by his own account and many others.”

On Friday, Mike Pompeo said “We do believe that it’s likely that the plane was shot down by an Iranian missile.” Now, it seems, he was absolutely right.

The President said he “deeply regrets this disastrous mistake.”and records that a human error “led to a big catastrophe and innocent people were killed.” Indeed, we also have the name of the man who made that error, one of the Revolutionary guard, Amirali Hajizadeh who has reportedly said, “I wish I was dead”.

But admitting a mistake is only the first step. The rest, which can take some time, is about putting right the mess created. I fear that President Rouhani may not go very far towards fixing what he has done wrong, and already he is scattering blame in the direction of the US and the Ukraine. This is regrettable. 176 people died when the missile, apparently, hit the cockpit of the plane. It is impossible for Iran to remain haughty about this scale of “mistake”, yet the language used does not seem nearly apologetic enough. And it is not enough to hang some boffin out to take the blame. In the end, the way this news has seeped out, dribbled out, is testimony to a regime absolutely out of control. The level of disaster here cannot be excused as “a mistake”. This goes well beyond “a mistake”, even “an unforgiveable mistake”, though that single adjective is a sign that Iran recognises this may not be a story it can ever spin. Nor, of course, in this case, would it be a time to press the crowds out on to the street…

Here is what is reportedly said: “Ukraine International Airlines Flight 752 had taken a sharp, unexpected turn that brought it near a sensitive military base”

“Human error at time of crisis caused by US adventurism led to disaster.”

The regime is also preparing its excuse with expressions like: “human mistake and misfired”

Now, of course, would be the time to start releasing Western prisoners and to making overtures towards peace. Let’s watch this space and see what happens. My suspicion is that very little will happen soon.

Meanwhile, the new President of the Ukraine says that he will “insist on a full admission of guilt”

International pressure seems to have brought about the revelation some 72 hours after the “accident”. Indeed the official stance until today was expressed by the Iranian ambassador to the UK, Hamid Baeidinejad, who specifically ruled out a missile strike on the aircraft. Twitter has been full of indignation about Iran’s tardiness: “I don’t know what to do with my rage and grief. I’m thinking of all the ‘human errors’ in these years that were never revealed because there was no international pressure.”

The most striking and most discordant note, however, has been made by a spokesman, the head of the foreign relations committee in the Russian senate, a building I used to walk past every morning and evening: “The admission of error,” says Konstantin Kosachev, “although not immediately, and expression of condolences is sufficient to be accepted. With this, the incident should be closed.” I wonder what that suggests? That he is worried further probing will identify the missiles as made in Russia (maybe SA-15), or that further questions might then be asked about the downing of Malaysia Airlines Flight 17 by Russian backed Ukrainian separatists?

There are now street protests in a number of universities calling on the supreme leader to resign, calling various officials “liars”. Maybe this is the beginning of the end? Let’s hope so.

Cyrus is a celebrated character and adversary in Greek and Hebrew literature but his unofficial feast, today, is also a thing of fear for the Iranian authorities who have done all they can to discourage thousands from visiting his desert tomb in Pasargadae. The tough clerical authoritarians like Nuri Hameedani have branded the festival as “counterrevolutionary” which may well be partly true… Last year there was a slogan which read “Clerical rule is the same as tyranny” which is rather direct. 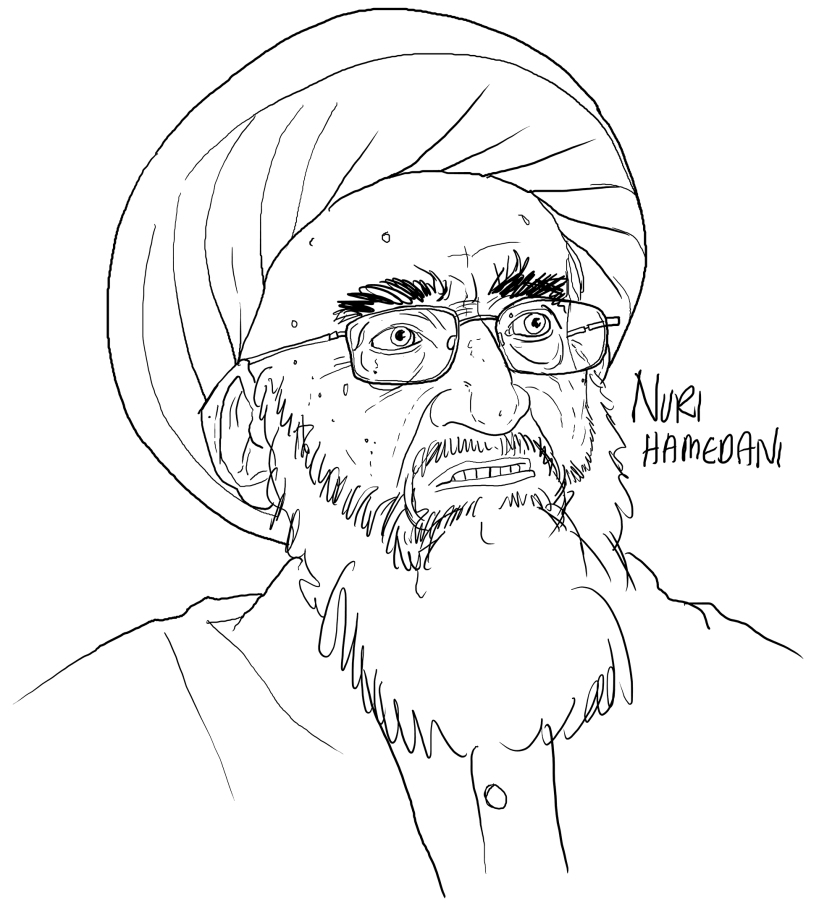 In the days of the internet, it is difficult to control  =how people want to express themselves without isolating the country from the modern age entirely. Certainly, there was little evidence of the “feast” before the present century. Last year, the regime resorted to threatening text messages to anyone they thought might be considering a trip in advance of the celebration. The site is apparently closed off this year. I do not have up to date information but would welcome comments from those who know!! Please add below!! 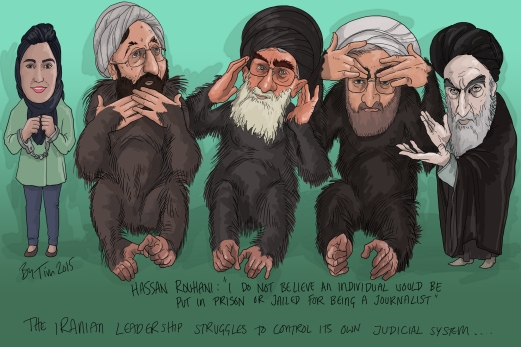 Here are the earlier versions of the cartoon

This is in response to news that Atena Farghadini faces 12 years in prison for drawing a cartoon that depicts members of the Iranian parliament as various animals- birds, goats, cows, monkeys- it is fairly mild and goes against the spirit of moderation put out by the new Iranian President.

Rumour has it that he is unable to control his own judiciary. 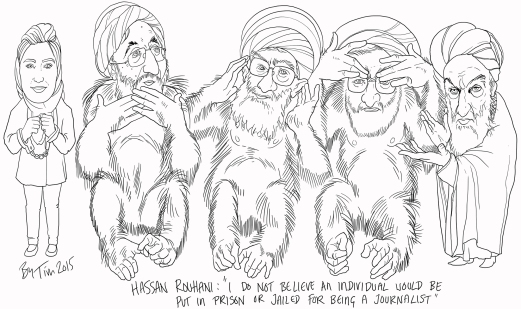