We have now had Cummings’ defence, which was rambling and really very depressing to watch. If Cummings is such a master of presentation, he should take lessons, maybe from Alastair Campbell.

One thing that came up, though, was that he categorically denied that he or his wife had symptoms of COVID before they went up to Durham. This is a game-changer. the fact that he also said that they did not stop on the way is reassuring but less significant.

He also said that his son was tested for COVID and was negative. Neither he nor his wife were tested.

One issue that did not come up was something that had been circulating for a while, specifically that Cummings’ son had been diagnosed with autism. I understand that this rumour has no foundation in fact, but really I wonder if it would have changed much if it had? There are innumerable people who have made huge sacrifices during the lockdown and being in lockdown has been very difficult for many.

The reporters who asked questions simply looked angry. Cummings is not a man who commands affection yet the moment with the boom mike as he negotiated his way to the car this morning was poignant. Somehow, I think he does not do sentiment. 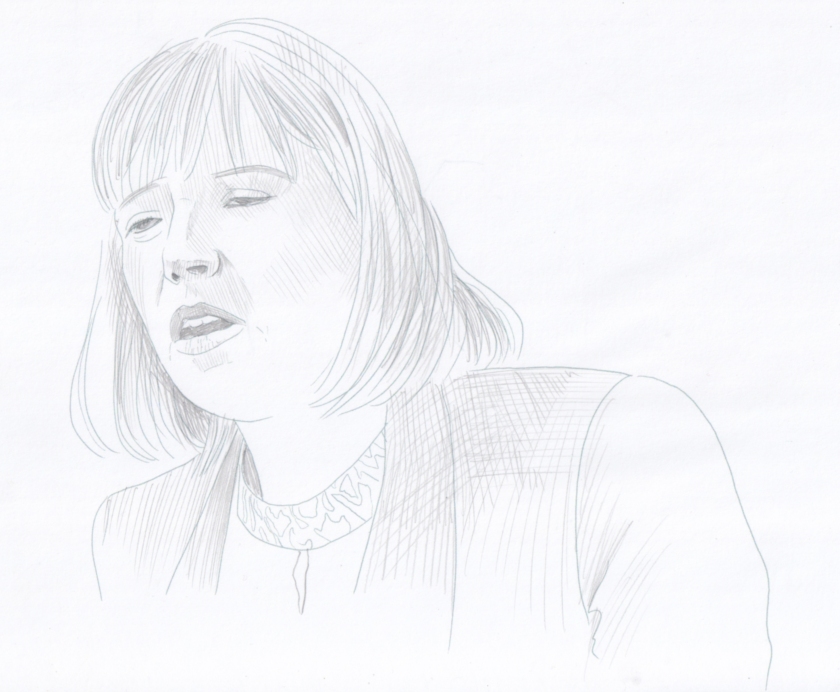 One of the reporters at Number 10, Beth, talked specifically about children with cancer who had been unable to visit hospitals and get vital treatment during the lockdown.

Others pointed out that people were unable to meet their families and that loved ones had died in isolation. This, I think, again slightly misses the point but it does so in a very interesting way. It confirms that if one person suffers, then we all suffer. That is quite true, we have a shared national and international crisis, but there is something else too:  that we must all suffer in the same way, that we must all queue for the same treatment and so on. The UK is rare in that even private medical insurance is generally linked to some aspects of the NHS. It is a single machine that drives our national healthcare and on which we all depend.

We all suffer, however, in different ways and our pain threshold is unique.

We can make a very strong case for exceptions to any national lockdown, but it does not change the fact that any exception mocks the enormous sacrifices everyone else has made, and compromises the effectiveness of the lockdown effort.

I think there have been a number of high-profile lockdown breakers- In this country, Stephen Kinnock, Neil Ferguson, Kyle Walker, Catherine Calderwood, Robert Jenrick, Piers Corbyn, possibly Nigel Farage and now Dominic Cummings so it is spread across the political spectrum. Of these, I think Corbyn must me among the most shameful for his scuffle with police officers and his complete disregard of social distancing. We look to our leaders to give an example and these people have manifestly given a poor example whatever their excuses may have been. I suppose in the end we must think of Caesar’s wife- those in, or connected to the public eye are held to a higher standard of behaviour.

Sometimes we forget that we are no longer an island. John Donne might be pleased by that. I am not.

When we check the foreign press, we find stories emerging there that should make us very anxious indeed about what is going on here, because what we are told here is not, it seems, what is actually happening. We need to worry too, and perhaps more importantly about the way these mis-truths are affecting our international reputation.

We are getting into trouble. The bullying and lying that has crept into our bureaucracy  in Britain does not work in an international crisis and is going to leave us with egg on our faces.

Already, it is evident that what the Government proposes is rarely implemented in full by our bureaucrats- banks are unable to process loans, insurance companies are refusing to pay up and so on. This is going on while, at the same time, a wave of goodwill is sweeping the country. Odd how one particular group is unable to change.

This morning, evidence is appearing in Turkey that what is being peddled by the government is not quite correct. It is true we dispatched a military plane to collect goods from Turkey and it is true that the said A400M in now on the tarmac in Istanbul and has been there since monday afternoon. It is also true that there is an export ban on PPE goods leaving Turkey. Robert Jenrick (the Housing minister) said a shipment of PPE was due on Sunday. Gavin Williamson (the education minister) said that the shipment from Turkey would come, he hoped, on Monday. What was not said, however, was that the shipment was not formally ordered and paperwork submitted until Sunday. This is madness.

The RAF transport planes have been on standby at Brize Norton for days waiting for the go-ahead to pick up 84 tonnes of urgently needed medical clothing and equipment, including the 400,000 gowns made by Turkish suppliers.

With a series of deadlines set by UK ministers missed, the British government has blamed its Turkish counterpart for causing the delays.

But after one cabinet minister said the government had hoped the three planes would be able to take off on Monday afternoon, British sources admitted that the Turkish authorities had not confirmed the supplies were ready to be picked up.

It would be just about acceptable if that was as far as it went. But the potential for international offence goes further – It is shameless that we accepted a free gift of PPE from Turkey only a week ago on 12th April (with next to no news coverage of the shipment in the British media) and that now we are pouring blame on Turkey for what are, in fact, our own failings. The news yesterday was dominated by stories that suggested there was a fault “on the Turkish side”. Quite true, but it was of our own making. Indeed, the Guardian ran a story saying quite clearly that the RAF plane that is now on the tarmac in Istanbul was sent to put “pressure on Ankara”.

This is how the Guardian reported what another minister said:

The culture secretary, Oliver Dowden, told the BBC on Monday morning that the delays were down to “challenges at the Turkish end” but appeared to suggest the issue was about to be resolved. He said: “I don’t want to start making more and more promises, but I understand that flight will take off this afternoon and those [gowns] will be delivered.”

We have got into a habit of using tenses in a woolly way. “I have done something” often means “I will do it (eventually or maybe)”. This has become the standard of bureaucratic action. It has worked well enough for mobile phones and for banking. Indeed, when the customer complains, the whole thing can be turned round and the customer can be made to feel that it was their failing. This is, of course, what we have tried to do here. It is shameful.

It can only cause more delay and international resentment.

We have got into the habit of apportioning blame rather than taking action. Look, for instance at this paragraph from the Guardian:

Unite’s assistant general secretary, Gail Cartmail… said the health secretary, Matt Hancock, may have to consider his position if he was not able to secure the necessary PPE. She said the situation could not continue, and that health professionals would be quite right to decline to put themselves in danger.

It seems to be in response to pressure on the Health secretary that the government announced the shipment from Turkey. Unite is right to be concerned about risk to its workers and right to raise the issue with the Heath secretary. But the answer is not to spin the story. The answer is to sort it out. We are locked into a spin cycle and we seem unable to get out of this.

We need to re-programme the way our country works.

And as for this PPE issue: we cannot pass the buck here- Our fault. Our failing and our bureaucrats. 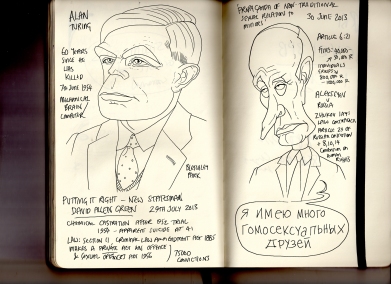 So many things going on today, like the D-day celebrations- though I am busy preparing notes on the problem of evil and the existence of heaven. Nevertheless, I thought it might be interesting to direct you to Jack of Kent’s website (http://jackofkent.com/about-the-law/) and specifically to his article in the New Statesman on the prosecution of Alan Turing (http://www.newstatesman.com/david-allen-green/2013/07/putting-right-wrong-done-alan-turing). The 60th Anniversary of Turing’s death is tomorrow and, while he has now received an official pardon and statues are springing up in Bletchley and other places to commemorate his astounding achievement, it remains a fact that Britain comes out looking very shabby from this story, as indeed it does from the parallel story of Oscar Wilde’s disgrace and subsequent death. It is not just the disgrace of Wilde that is important in the 19th Century, but the way that everyone connected with Wilde was brought down too with one puritanical salvo. I have been thinking alot about Aubrey Beardsley whose brief period of activity was certainly cut short by the Wilde scandal. Of course, the Turing story could have been much, much worse. Had he been “caught” a few years earlier, it is likely he would have been imprisoned and never completed or maybe even started his work at Bletchley. It may just be speculation but I fancy the war would have gone much worse for us without the development of the “mechanical brain”. The hand-wringing, therefore, about laws in Putin’s Russia looks a bit rich coming from the UK- Russia, at least, can sit back and lay claim to the fact that it had no hand in the comparable murder or suicide of Pyotr Ilyich Tchaikovsky, that it has not yet driven great writers or great thinkers to their death because of some puritanical and outrageous piece of knee-jerk legislation- not yet, anyway… There are some curious aspects to the process of the law in this area in the UK. One of the men who was responsible for tightening up the laws against sodomy/buggery was a man called John Atherton, an Oxford man and later protestant Bishop of Waterford in Ireland. He was accused of having an affair with his servant, a tithe-collector called John Childe and both of them were hanged in 1640. In all likelihood, he was the victim of a conspiracy but it is worth reflecting on the way public sentiment turns against any form of salacious puritanism and how easily mud sticks when someone is accused. Maybe it is because our National hands are dirty/soiled, therefore, that we have a duty to talk to other countries about the stupidity of enacting silly restrictive and irrational laws that perpetuate prejudice, discrimination blackmail and fear. Because we understand the danger and the appalling consequences not just to the country itself but to the lawmakers. 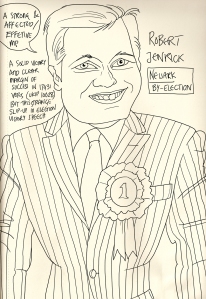 I did some drawings of a man, Robert Jenrick, who won against UKIP last night in the Newbury by election. His acceptance speech was a bit of a mess, but he clearly mounted a very good campaign against stiff opposition from Labour and Farrage. Congratulations.