The ‘wiser’ generations, generally speaking, have a keener ear for nonsense. The EU, no doubt, a mushy construct of liberal ideology, bureaucracy, and hubris, must register on their radar with the footprint of some alien mega-spaceship – the stuff of Independence Day. The babbling of the ‘young’ can be dismissed as endearing but deluded naivety. So the grey voters crowded into the voting booths, walking sticks and all.

The tragedy is that now, in the wake of ‘having it their way’, this wiser generation has apparently paused, ‘realized’ its terrible mistake and, equipped with a wandering index finger, on the closest keypad, and in half an hour, has found an ‘online petition’ and signed it. Today, that petition is upwards of 3 million votes.

The most irresponsible part of this process is the lack of conviction.

Meanwhile, the lacklustre response that we have had from the EU means that they are still bureaucratic. The fact is that Juncker hasn’t yet resigned and that Merkel is still throwing her weight around as if nothing had happened, while Hollande and Tusk wallow in repeating useless platitudes;  and instead of begging the UK to sit at the table and discuss reasonable demands, these lords of Europe remain as supercilious and hubristic as ever. The fact that they claim to have looked at all options, mock Cameron for failing to prepare for Brexit, and yet have no contingency plans in place and that they insist on walking blindfolded to a political crisis of epic proportions means that they are as liberal and self-obsessed as they have ever been.

But the EU’s moves are being carefully watched by those young economists and young social commentators who voted stay, but who are now starting to think they might have voted the wrong way.

Those working for the markets wonder, what country will follow Britain’s exit. Greece? Portugal? Italy? Will we see the partitioning of Spain with the Catalonian vote only 3 weeks away? How will the EU negotiate further fiscal consolidation between the Eurozone members, when each member can now play the Exit card?

Those with more of a cynical edge who write blogs wonder- how will a divided EU stand up to Russian aggression and export its principles of democracy beyond Europe? Can Europe really afford or allow the break-up of the United Kingdom? What happens to the UK’s seat as a permanent member of the UN Security Council? Should the UK’s permanent membership, in any case, or in the near future, be substituted for England and would Scotland, independently have its own claim?

There is, of course, the matter of greed: France and Germany, jealousy watched London become the financial capital of the World and profit from the riches that came with it. The French sacrificed their national pride to keep Paris beautiful, unharmed by German planes – so why aren’t American Investment banks flocking to Paris or to Frankfurt for their European headquarters? The answer is that investment bankers too have a keen sense for nonsense.

The UK will undoubtedly face economic consequences. It is widely expected that asset prices will fall, starting with house prices. The housing market has received two shocks this year, firstly, when Osborne (welcomingly) increased stamp-duty for second-time buyers, which so far has led to a 5% downward correction in house prices and secondly, with the Brexit vote. Real Estate Funds like JJL and CBRE have already started postponing their planned UK investments. CBRE only invested £180 this year, compared to £650 in 2013. Many leading investors are predicting a correction averaging 10% in the commercial real estate sector, particularly in London.

The DAX, CAC and FTSE, which are all very good indicators of economic expectations, have dropped to 2011 prices. The pound and Euro are both taking a beating against the dollar and other currencies, while bonds yields have dropped to record lows; which together with an appreciation in the price of gold, indicate investment is drying up.

It is perhaps too early to tell how the general economy will react, but a correction downwards in GDP figures is widely expected. The low exchange rates might improve exports, but that is expected to more than be countered by the fall in investment and consumption.

However, this isn’t all bad news. The fall in asset prices will provide much-needed relief to some social anxiety. Housing might, in this way, become cheaper for first-time buyers. Wages in the lower thresholds will probably increase as unskilled European labour goes home. The NHS will have fewer patients and doctors may have an easier time working, maybe only 10 hours a day. Parents will scarcely have to worry about getting places in schools.

The real losers might still be the EU. The money that was flowing out of depressed continental assets and into the UK, won’t stop flowing out. Switzerland and Norway will probably have their hands full in the near future. The hostility to investors remains a core principle of French liberalism (thus the EU); simply ask Emmanuel Macron.

Greece remains a troubled asset, (property of the German state – before Tsipras came along, whoever knew you could actually buy a country?) and fiscal unity seems to claim exponentially more of Draghi’s seemingly infinite life-line. The EU may just survive Brexit and is determined to do so; it may even survive another shock like Brexit (should we call that Catalonia?), but it won’t be able to avoid a third shock. 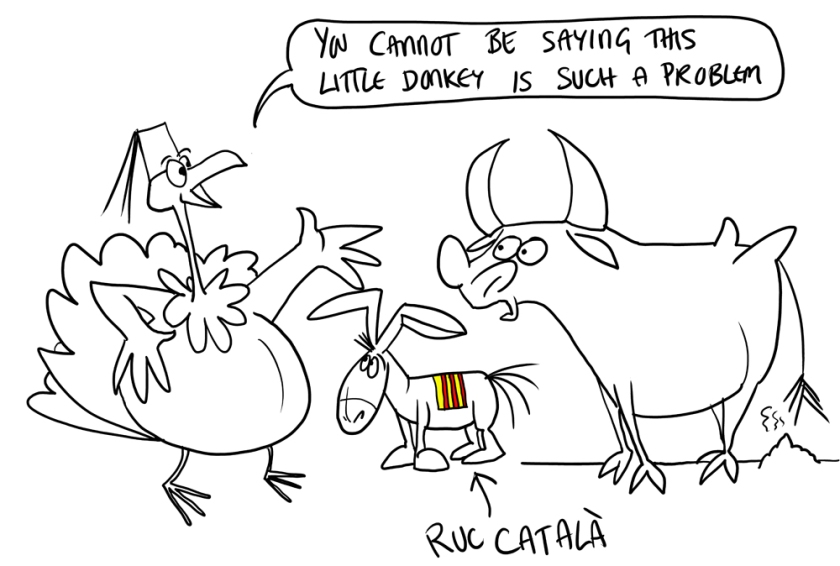 Nothing is written in stone. The will of ‘the people’ might change and a second referendum, whether Blair proposes it or not, may become a political necessity given the weight of the UK in the global political arena. However, rather than turn around and backtrack, we should be further convinced that the outcome of the referendum was the right one. If the EU buries it’s multi-headed self in the sand and refuses to acknowledge that we didn’t leave on a whim, let the olds have it; the olds have it.

My attention was drawn today to a Japanese manga image which had been described as “Racist”. I thought initially it was no more racist than something by the brilliant artist Joe Sacco, though the manga picture is based on a young girl who is clearly not smiling in the original photo. There is, though, a hint of a smirk in the manga. I assumed this was style or something.

The original image is at the bottom of this blog

Later, I saw an article about this which translated the Japanese text and I was appalled. So much so that I have re-drawn the image and added my own text here:

The image is based on a photograph of a girl called Judi, aged 6. I have tried to preserve some of the manga style. I hope what I have drawn is sympathetic to the original. This is a very young girl in a tent city. She is there because her family wanted to get her out of the war-zone. This is not her choice. She should command our sympathy, pity, and respect. She does not deserve the ridicule dished out by Ms Hasumi. 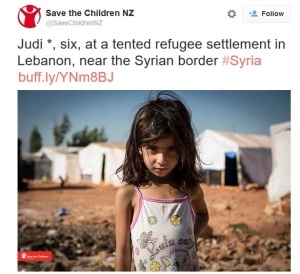 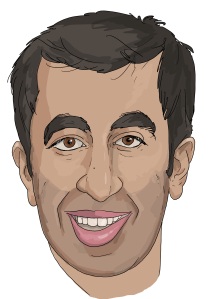 It seems to me that this is our moral duty and our responsibility as a civilized country. More than that, we must ensure that the Referendum on the EU does not get bogged down, as was the last election, by a debate on immigration. The refugee crisis is set to continue for many years whether we are in or out of Europe and we will miss the opportunity to effect major change and reform in Brussels, or indeed to quit the EU project and forge alliances across Europe independently. 1) We cannot allow racists and bigots to hijack the debate. 2) we need to lead the way in promoting a proper response to the victims of war. 3) our doors must always be open to people in need. 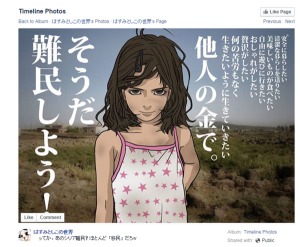 This is what the original advert said in Japanese apparently:

“I want to live a safe and clean life, eat gourmet food, go out, wear pretty things, and live a luxurious life… all at the expense of someone else,” reads the text on the illustration above. “I have an idea. I’ll become a refugee.”

The artist, Toshiko Hasumi removed the picture after a campaign by a Change.org. It is the text that really causes offence here, rather than the image. But once the text is clear, the image itself takes on a new identity- the girl is too aware, she smirks too much. It is deeply disrespectful.

“But I will not apologize no matter what,” she said. “Because unlike in Japan, you’re destined to lose in a court battle overseas once you’ve admitted to your fault.” She went on to say that the image was an attack on economic migrants who are “pursing a safer, more comfortable life in a foreign land under the guise of pitiable asylum seekers.”

The photographer said it was a “shameful misrepresentation of the plight of the Syrian people” and that he was “Shocked + deeply saddened anyone would choose to use an image of an innocent child to express such perverse prejudice,”

Japan will not accept Syrian refugees but has pledged $810 million to aid refugees from Syria and Iraq. Of 5000 asylum seekers who applied last year, Japan accepted 11. This is a start and I know many of my Japanese friends are keen to see more done to help in the crisis. Also, of course, Japan is right to support the countries most affected.

Toshiko Hasumi, however, has a record of questionable behaviour and has apparently written fairly negatively about Korean women who came to Japan especially during the 2nd World war.

Thank God there has been outrage about this in Japan!

I have been speaking to other people who have, like me, been inspired to draw their own tribute to the Syrian girl featured in the original photograph and to post a more uplifting message. Here is a drawing by Kumiko Higashi courtyesy of Takahiro Katsumi: 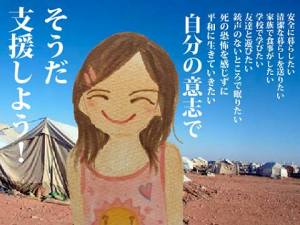 Here is the english translation:

… ALL BY YOUR CONSCIENTIOUS CHOICE?

I GOT IT, HELP A REFUGEE!

This is a POSITIVE COUNTERACTION against the hateful campaign launched by the right-wing manga artist Hasumi Toshiko supporting the Abe Administratin that allow hateful expression go unbound. Why not spread good will instead of hate or animosity? Yes, why not?

Also, here is a version of my picture translated into Japanese: 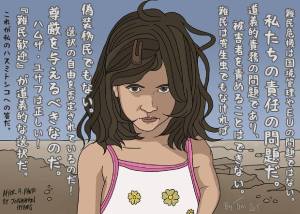