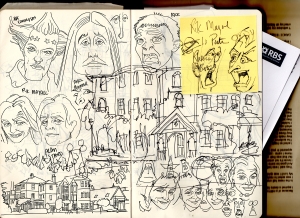 The Young Ones was gross, silly and outrageous written by Mayall and Ben Elton (who went on to doctor “Black Adder”), mixing farce, absurdism and political jibes (“the bathroom’s free, unlike the country under the Thatcher junta”). Of the four main characters, Neil is the easiest to caricature, and was the easiest to bully in the show so maybe that says something. Rick, the Rik Mayall character, is the hardest to define and to draw. He puts forward a series of outrageous views and is generally ignored. So, if Neil is Wendy Craig, the “wife”, then Rik is essentially a reworking of the Nicholas Lyndhurst character in the Carla Lane sitcom “Butterflies”. I think both series ran for about 25 episodes in all, though “Butterflies” seemed to be going on for ever (and I loved it). Strange, the impression both shows made. The “Young Ones” began in the last season of “Butterflies”. There really is no link between them except that both series, whether they intended it or not, are strictly formulaic. I think the father figure in “Butterflies” gets a better deal than the “Mike” character in “The Young Ones”. But on to the formula of the classic family sitcom, Carla Lane added introspection while Mayall added punk anarchy. Very brave to commission the “Young Ones”! Rik Mayall turned up in Black Adder and was tremendous. A fine performer and writer and he will be missed.

Convention for farce is very important. It is about setting up a discipline which can then be broken and leads to confusion, embarrassment and all many of intrigue. With a television series, that convention can be established early on and later episodes are all about manipulating the characters. This is the way Commedia works and more historically the way Roman comedy works too- 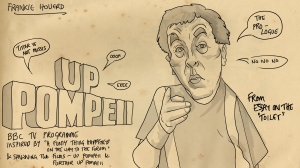 (eg: Plautus or frankly the Sondheim update “A funny thing” which had Richard williams titles or the British TV spin-off “Up Pompeii”). Stock characters with predictable responses to given situations…and just to look back at Rik Mayall, the commedia technique is mostly based on physical violence.

One thought on “Alternative Comedy”