in a slightly obscure shopping centre in the North of Berlin, there is an exhibition of sculpture. The images are all angels and they are quite striking. I did some drawings, (apologies for the frog: it was in the window of a shop selling spectacles) but it also made me think about the subject of “angels” itself. The “hierarchy of angels” is quite confusing and the angelic image -a man with wings, appears in a variety of religions. It can be found for instance in Thangka paintings in Tibetan buddhism and may or may not relate to links between early Buddhism in Tibet and also an exiled gnostic sect that is supposed to have taken its icons with it across the Himalayas.

The subject is called “Angelology”. Zoroastrianism, perhaps the earliest religion to deal with angelic forms, calls spiritual entities taking messages”yatazata”. In mystical Judaism, there are ten levels of angels and Pseudo-Dionysios, ranks them in “Choirs”(the collective noun for many angels would be “choir”, then) in a Christian text “On the Celestial hierarchy”. Aquinas ranks them in 3 spheres. Islam puts them in 14 groups. In all systems, there are lesser angels and arch-angels. Orthodoxy thinks of 9 orders of angels.

In the system I am listing, I have excluded the Niphilim הנפילים, sometimes called Giants or the Sons of God, בְּנֵי הָֽאֱלֹהִים particularly in Job, 1:6 and 2:1, where the term refers to specifically to angels. The term “Nephilim” itself is used three times in the Bible, in Gen 6:4 – in the LXX translated as “the angels of God”,’οι αγγελοι του θεου, and Numbers 13:33. A similar word is used in Ezekiel to refer to the dead Philistines. The dead sea scrolls make it clear that the Nephilim were engaged in some sort of sex act with humans. It was the second time the angels fell from grace.

seraphim שְׂרָפִים or σεραφείμ (after Isaiah 6: 1-7 who surround the throne of God and have 6 wings). These are the “burning ones, maybe originally pictured as snakes, δράκονες. In some literature, the throne of God is protected by heavenly serpents, the phoenix and the bronze hydra, the Chalkydri, the elements of the sun. In the Nag Hammadi texts, the Seraphim are seen as dragons. It makes alot of Chinese mythology accessible, doesn’t it!

cherubim כְּרוּבִים (with 4 faces: ox, lion, man and eagle following the images of the 4 evangelists. They have a lion’s body with ox feet and 4 wings, Gen 3:24, Rev 4:6-8); this is the strange fellow illustrated below!

Thrones θρόνοι or Opanim (generally pictured in icons as wheels). They are linked to the chariot that takes Elijah to Heaven and referenced in Ezekiel 10:7

Dominions or Lords: kyriotetes κυριότητες (or “Hashmallim” led by Zadkiel- this is the 4th part of Maimonides’ Jewish ranking as well as effectively the 4th of the Christian ranking) This is referenced in Ezekiel 1:4 as fiery or “amber” beings. The modern word for electricity in Hebrew is Hashmal (חשמל) which had been used by Pinkus Rutenberg in 1923 to name the fledgling israeli electricity company in Palestine some years before the establishment of the State of Israel; the use of the word for “electricity” is either therefore from Pinkus or from an early Ivrit poet, Judah Lieb Gordon, but the word in Latin “electricus” simply meant “amber-like” as indeed did the word in Greek “ήλεκτρον”.

These angels control the nations of the earth and are visualised as winged humans, the typical angel image. They have orbs of light on the end of sceptres. St Athenagoras says that Angels are “set in command of the elements, the heavens, the world, and all within it” and St Gregory the New Theologian says: “Each of them has received under his control some particular part of the universe, or is attached to some particular thing or person in the world, as is known to Him Who arranges and orders all things, and all work towards one goal, by command of the Builder of all things”

Powers or Authorities (potestates or exousiai, ἐξουσίαι) (ephesians 3.10) -control history, the winged warriors (Satan may have been one of these) 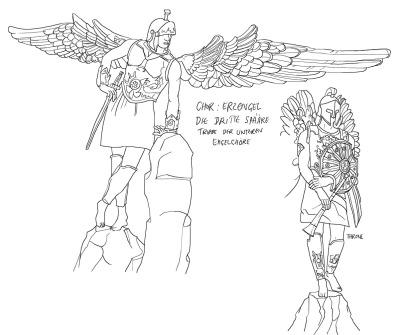 Mostly messengers. This is the proper function of an angel and explains why he is depicted with wings like Hermes to carry messages from Heaven to earth. This is why we use the term Άγγελος which simply means “messenger”.

Principalities or rulers (archai ἀρχαὶ) They wear and crown and carry a sceptre. Their role is to carry orders and blessings to the world.

Archangels ἀρχάγγελος or רב־מלאך- the word is used twice in the New Testament: 1 Thess 4:16 and Jude 1:9. There are traditionally 7 archangels who are commemorated together on 8th/21st November in the Orthodox church – the feast of the Synaxis, Σύναξις of angels: Michael and Gabriel get mentioned in the New Testament. Among the other archangels is Raphael (from the book of Tobit) and Uriel, אוּרִיאֵל (from the book of Enoch, 2nd book of Esdras/IV Esdras in the Vulgate and the Testament of Solomon). Traditionally, it is Uriel who rescues John the Baptist and his family from the massacre of the innocents by Herod and sends them to join the Holy family in exile in Egypt. This is the reunion that is shown in Leonardo da Vinci’s painting of “the Virgin of the Rocks” in the Louvre and it is the angel Uriel who is seated on the Right. In Hebrew and Greek thought, he is the angel who inspires poetry and is therefore often depicted with a scroll of parchment and in Milton, he guards the sun.

In the Revelation of Esdras a further five archangels are listed: Gabuthelon, Beburos, Zebuleon, Aker and Arphugitonos. Two issues, however, have affected the naming of archangels in the West. The first was in the council of Rome in 745, when Pope Zachary condemned any “obsession with angels” and tried to clarify the existing system saying that only angels mentioned in the formal canon of scripture should be revered by Christians. The second issue was the appearance and crushing of the Bulgarian heresy, Bogomilism, which flourished in the 11th century and appeared to use the angel Uriel in its services.

Other named angels that fell out of favour with the West are Suriel, Jehoel, Zagagel, Akatriel, Metatron, Yefefiah, Nathanel, Raguel, Saraqâêl, Remiel and Phanuel who is also often identified as Uriel. Among the fallen angels are Samyaza, Adramelech and Azazel. There is also Azra who became an angel (pressumably Azriel) after finishing his life “without tasting death” (2 Esdras)

It is worth noting that seventh day adventists believe Michael the archangel is also Jesus.

Bringing the list of 9 orders to a close are ordinary Angels (Malakhim or ἄγγελοι) whose role is simply to deliver messages. These may also be the “guardian angels”. St John Chrysostom believed that there may be more orders of Angels- we have simply not been given enough information.

Islam has a less ordered system but the function of the angels is broadly similar. They communicate messages and transmit power from the divine.

Of the named angels in Islam, the most important is Jibril/Jibrail who revealed the Koran to Mohammad. He is mentioned in the Koran (2.97)

Israfil is probably the same as Raphael. His job is to blow the trumpet on the last day (Qiyamah).

Mikail (Michael) is the angel of mercy, responsible for rain and the blessings we receive on earth.

Azrael (ʿIzrāʾīl عزرائيل orعزرایل) is the angel of Death. This is a variant of the Hebrew spelling Azriel who receives the prayers of the faithful when they reach heaven. Azriel figures importantly in Kabbalism (Zohar.2:202b)

Munkar and Nakir who question the dead

Harut and Marut  (Sura 2: 102) who “tested people in babylon” to see whether they might believe in magic. This is very similar to the story of Jannes and Jambres in II Tim- these were the two magicians in the court of Pharoah rather brilliantly brought to life in the film “The Prince of Egypt” and played by Steve Martin and Martin Short. In the film, they are called Hotep and Huy. there is a link here. It is a stunning sequence:

In the Koran, there are many mentions of angels, and also of some specific groups with specific tasks:

Jundullah (warrior angels who help Mohammad on the battlefield)

Hamalat al’ Arsh– who carry the Throne of God

Darda’il (the travellers) who search for people who remember God

Zabaniah -19 angels who punish the dead in hell

Finally, there is Iblis or Shaytan is not a fallen angel but one of the jinn