I will add more thoughts to this over the next few days, but it struck me that one of the key similarities between conducting and animating is in the use of what animators call “the slow in” and “the slow out”. This is a feature of or a support to key animation, where figures move from key pose to key pose. It was developed to a fine art by the Disney studios and Richard Williams’ book on animation makes much of the methodology. The Key poses system lends itself to the factory output so a key animator might animate a series of key poses while an assistant or “inbetweener” might animate the “boring bits” inbetween the key poses. (I rather like inbetweening: it is entirely technical) This slightly misses the point of key frames, though, because there are also the story-telling moments that we need to see in order to understand what is actually taking place. These key frames provide the pulse or beat of action, and what happens inbetween simply links that action together. To emphasise the keys, animators have tended to cushion key drawings,  what Williams describes as “favouring” a key pose. So, if I take one key pose of preparing to hit someone, and the other key pose of the actual thump, there might be room for 5 frames in between. Frames 1,2 and 3 together would be a slow out and might all look fairly similar to the first key drawing, the “anticipation”, allowing only 1 frame that is literally “inbetween” and then cushioning the thump with frames 4 and 5. In musical terms, this would be about varying the tempi using accelerando and retardando. These small adjustments pick out or emphasise key moments. They are what lie behind the personal imprint of a great conductor. So too with animation: there can be great drawing, but only clever timing makes great animation. It is what the animator does Between the key poses that makes for greatness so arguably, it is the lowly “inbetweener” who is the master animator! Here, with no reference to this debate are drawings of two tailors from Leamington Spa: 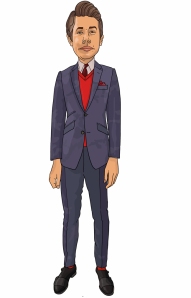 and a bit more today: