In defeating the Nawab of Bengal, Clive of India used a rather dodgy ruse. He had been working with a messenger, an equally dodgy businessman called Umichand who negotiated between his officials and Mir Jafar, one of the Nawab’s senior commanders who was in reality a turn-coat and who would eventually profit from the arrangement by succeeding Siraj Ud Daulah and becoming Nawab himself. To his credit, he was very generous both to Clive and to the British thereafter.

At some point, Umichand threatened to tell Siraj what was going on, so he needed to be bribed into silence. All worked out well in the end.

Still, the dodgy deal remains despite the positive outcome.

Because Umichand was untrustworthy, Clive allowed a document to be drawn up promising £300.000. However, it was signed in Clive’s absence or not signed at all…Nehru said later that Clive won the Battle of Polashi “by promoting treason and forgery”. Despite this, (and even because of this) Clive of India became a National hero.

Now, clearly, if I understand it correctly, Gordon Ramsay has been caught out today by something very similar. A deal for the York & Albany pub near Regent’s park signed in his absence by his Father in Law, Christopher Hutcheson, leaves Ramsay with a bill of £640,000 per annum. I have no doubt that Gordon knew nothing about the way his signature was being used, yet the judge did not believe him or more to the point, did not think it mattered. He called the ruse “entirely implausible”. Of course, Ramsay could say with certainty that the signature was not his- it was done by a machine, and in his absence, but despite this, he is now held to be liable for the restaurant. The Judge said, “the machine was routinely used to place his signature on legal documents.”

“I do not accept his evidence to the contrary.” Ramsay remains married to Hucheson’s daughter and they have 4 children. Hucheson was sacked as Ramsay’s  manager in 2010. The Judge concluded that, however much Ramsay regrets his association with Mr Hutcheson, he nevertheless remains committed to the lease for 25 years. He was ordered to pay about a million in legal costs.

Is it that we have learnt something from history? Who knows. These signature machines seem very ingenious. If I remember correctly, Admiral Watson refused to sign the document for Clive, so there was a second document to tease the Indian businessman – today, Clive might have used a machine. Would any judge have believed him? Would there have been statues of Clive around London had he come before Mr Justice Morgan? 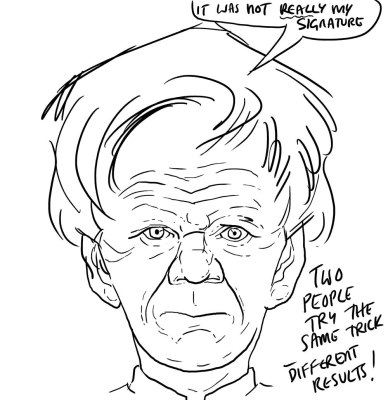 Here is a drawing of Ramsay and of a slightly paunchy Clive after the famous painting by Nathaniel Dance-Holland in The National Portrait Gallery. Neither looks very happy. 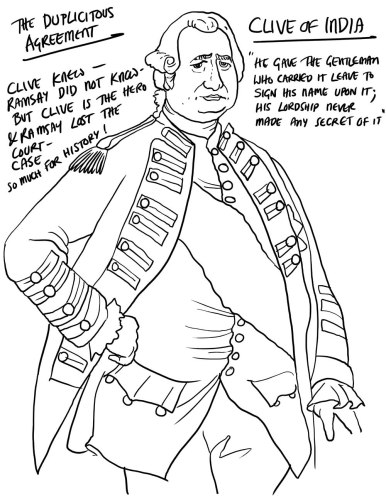 One thought on “Clive of India and Gordon Ramsay”