Quite apart from the fact that she is first seen floating around on a cloud, the imagery of Mary Poppins is loaded with intense Christian symbolism. I was awoken last night by the sudden thought that “Feed the Birds” is fundamentally religious and the centre of the film itself. It is a metaphor of hope and love and she is still on the steps of St Paul’s as Jack speeds past in the opening song of “Mary Poppins Returns”. Richard Sherman says “He [Walt Disney] loved that song and knew it was the heartbeat of the whole movie”. He adds that it was “deeply spiritual.”

It is a song set around the Cathedral of St Paul’s with reference to the “Saints and Apostles” as well as references to charity/agape/caritas. But the image of the bird is loaded with more significance than twitter: the bird is not only a symbol of peace in a troubled world, it is the Holy spirit, the paraclete or comforter who remains with us after the ascension.

To check the significance of the “feed the birds” scene, I listened to the score again today- the composers open the film with the tune and it is this tune that underscores the sunset reflection before the children, Bert and Mary descend from their vision of London. It is played also as Tomlinson walks towards the bank to be sacked. It is the thoughtful heart of “Mary Poppins”.

Here’s a quick summary of the main religious features of Poppins.

1) She is a Virgin Mary figure, equipped even with the same name. The imagery of “white witch” which Travers provides is all but excised by Disney.

2) Her divine arrival (and later ascension) by umbrella on the East wind (matthew 24:27), her simple costume and nun-like demeanor; her poverty (she carries her life in a carpet bag that is apparently empty); her magic acts which are there to reassure the children that their belief in her is worthy. (like miracles); she consorts with the working class (chimney sweeps); she is led by her heart rather than by considerations of money.

3) She is victimised by the father who accuses her without reason (like Judas or the High Priest if she represents Christ, but simply recalling the gossipers who worried about her speedy pregnancy and questioned the legitimacy of Christ’s birth.) She turns dirt into hope and takes the Children from the fireplace/chimney/hell? upwards to a vision of London- “the whole world at your feet.” There is even a moment of communion over spoons of magical medicine (a few years’ later, the Scaffold did a song about “medicinal compound- most efficacious in every way”). 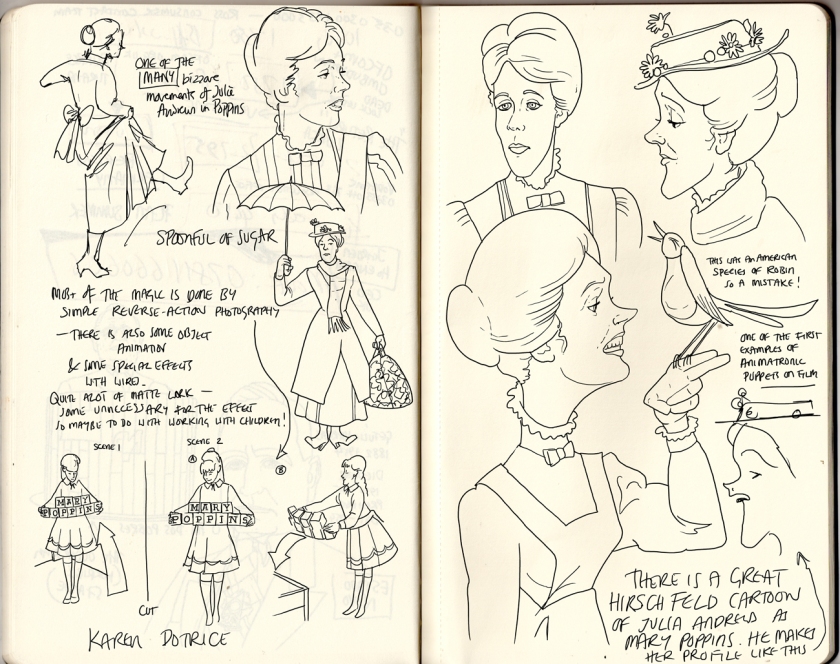 4) She is not the prophet or the saviour- she points instead to others- in this case to the bird woman (Jane Darwell) who is surrounded by a nimbus on the steps of st pauls; but positive changes come over the whole household (beginning with the cook and maid)

5) She takes the children (and Bert) into an enriched vision of the world- an iconic landscape. A window into heaven, first in a chalk pavement picture and later in seeing reality transformed as the sun sets over the chimneys of London. Certainly enough for some serious thoughts about the theology of the icon as presented by St John of Damascus! When the children emerge from both ecstatic visions, they have a tendency to shake hands indiscriminately and use nonsense words – is this a reference to glossalalia?

Most importantly, the birds’ song recall the birds and lillies of Matthew 6:24-34

2 thoughts on “Mary Mary quite contrary”