I only watched Gogglebox to support Woody and his mother.

I drew furiously while watching it. It was very interesting. This, incidentally, was a picture of Woody and his mother watching “the Favourite”, certainly not a film I would have liked to have watched with my mother. But Woody was there with a quick “Oy oy!” He knows how to place these one liners.

Today, the media has been whipped up about what happened to Eamonn Holmes and rightly so.

I feel deeply for Eamonn Holmes partly because I was also the victim of some nasty editing on TV. In my case, this took place in Russia and what I had said was dubbed over with words that I never used at any point in my interview. The solution when I complained was to remove the entire episode from the live feed. Of course, I expected a better response from Gogglebox and I am pleased it has now been sorted out.

When one fan begged him not to take any notice of the trolls, Eamonn hit back: “Thank you SL …. but a lie unchallenged becomes the truth.”

Believe me, I can understand how wounded and upset Mr Holmes must have been. At the bottom of this page is a link to my story as reported by the BBC.

This is what the Mail on line have written this evening:

Celebrity Gogglebox have issued an apology to Eamonn Holmes after he slammed them for their editing of him during Friday’s show.

Eamonn took to Twitter calling out the show’s ‘idiotic and cruel choice’ to air a clip of him joking after a harrowing moment from the BBC series Ambulance, instead of a filmed clip of him discussing his father’s death.

Producers issued a grovelling apology on Saturday to the This Morning host, 60, in which they promised to edit future repeats of the episode.

In a statement shared on Gogglebox’s Twitter, they wrote: ‘We have apologised to Eamonn over what happened in this week’s episode. We understand and respect Eamonn’s feelings on such a deeply personal story

‘We have taken the decision to edit the episode for future repeats and All4. We look forward to working with Eamonn and Ruth for the rest of the series.’ 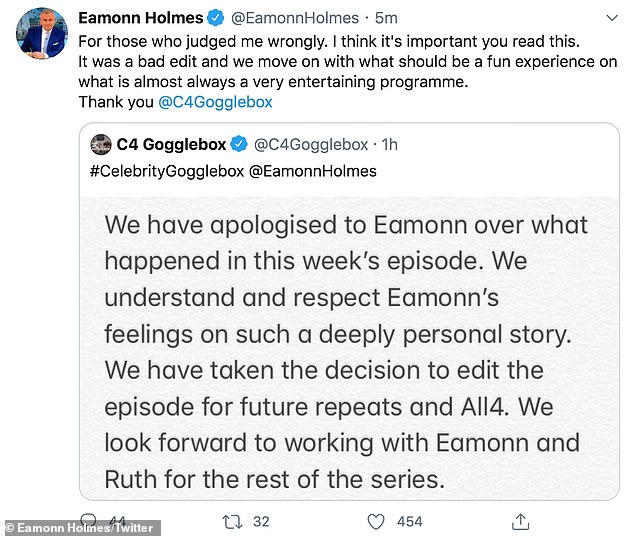 He wrote: ‘For those who judged me wrongly. I think it’s important you read this. It was a bad edit and we move on with what should be a fun experience on what is almost always a very entertaining programme. Thank you @C4Gogglebox.’

He then shared the statement to his Instagram, but this time wrote: ‘After last night’s clumsy edit which led to a huge amount of distress and outrage to viewers ,myself and my family…. Thank you, We move on and look forward to making fun TV.’

Viewers were quick to react to the show’s apology and editing plan, with some praising the plan, while some still felt disappointed by their actions.

‘This is my favourite show and I feel let down by this! I’m pleased you have corrected your mistake’ tweeted one follower.

While another remarked: ‘Hope the damage & hurt you caused to @EamonnHolmes can be undone with this. I fear not. I’m so disappointed in my favourite show.’

‘I’m sure Eamonn and Ruth are big enough people to accept your apology and move forward, though I, for one, would understand if they chose to take no further part in the series. Your actions to edit future transmissions of this episode are correct. Just my opinion’ wrote a fourth.

‘Thank you. I messaged you earlier to do this. It was totally unacceptable to show what you did but I hope Mr Holmes can accept your apology’ commented a fifth person.

With another agreeing: ‘This is good see! I thought is was appalling the way they edited the episode! Hopefully they are more careful in the future!!!’

It comes after Celebrity Gogglebox was removed from the catch up service All4 in light of Eamonn’s outburst.

In the scene that Eamonn criticised, the celebrities were moved by a touching story where a child phoned 999 to report that her father was having a heart attack

Bizarrely, Eamonn was shown telling a story about how he drove his wife to the hospital when his son Jack was born. It was a good story and he explained that even while his wife was having contractions, she had to give him directions. The problem was that it appeared insensitive to be telling such a story in response to the very touching scene where a child gave his father life-saving first aid.

One wrote: ‘@EamonnHolmes comparing taking Ruth to hospital to have a baby – with a 10 year old lad doing chest compressions on his dad that’s just had a heart attack – is beyond belief!’

Another shared: ‘Did Eamonn Holmes just compare driving his wife to hospital to a 10 year old child giving chest compressions to his dying dad on #CelebrityGogglebox? Unreal…’

I am reminded of the story told about the Cure D’ars and the girl who spread gossip. It is impossible to fully repair the damage done. It does not even have to have been done deliberately. The fact that it was done is enough. In the story of the Cure d’Ars, the girl is asked to pluck a chicken as she walks along the road and when she gets to the church, the cure tells her to go back and pick up all the lost feathers. “That would be impossible”, she replies and he agrees. That is the problem with gossip. that is why it is so important to get things right. The Mail finishes its story by printing these two telling tweets from Eamonn Holmes.

However, the presenter did not ignore the trolls and instead hit back with: ‘Please read my posts. I’m then expecting an apology or an understanding from you ….. or are you not man enough ?’

In another tweet he penned: ‘I’m devastated that the Boy, the Ambulance Service and my whole family have been hurt by this …. sometimes I despair at decision making in TV.’

My story can be found here:

I can think of only one successful example where dubbing completely different text over a tv dialogue was both efficacious and right.