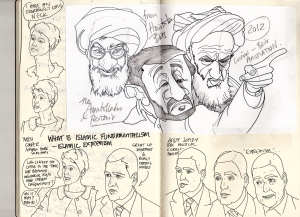 I despair of broadcasters who use the term “fundamentalism” as a catch all for the types of Islamic extremism that we would all broadly condemn. The problem with words that are vague and also loaded is that they take on a life of their own and pop up all over the place. Today, there is a fairly heated debate about the presence of extremism in some schools in the Midlands. There is a debate about who should take responsibility for this- the home secretary, Theresa May or the Education Secretary, Michael Gove. The shadow Home Secretary points out that the argument involves a betrayal of the principles of Cabinet government and that what is said privately and what circulates in letters between ministers should stay private so that the Government can present a united front on important issues that have been debated. The principle is that when a Minister rejects the consensus position adopted by the Cabinet, then he or she should resign. It is not honourable to take the spat out of the Cabinet room. 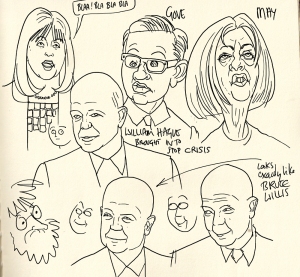 I drew the faces at the top because I was actually interested in lip movement and the reporter on the BBC had the most dynamic lip movement and seemed to be always on the edge of a smile or a gleeful whinny. The shadow Home secretary has one of the longest necks I have seen! William Hague has almost no lips.

Now to the issue about Fundamentalism. This began or was identified in the 19th Century as a branch of extreme Protestantism influenced by German Pietism and that reacted against liberal modernist approaches to bible interpretation. The term “Fundamentalism” became popular in the 1920s. But it emerged from evangelical christianity with a number of different emphases- it was never just a matter of believing that every word in the bible was “literally” true, though the theme of some sort of biblical “inerrancy” dominates the movement. The absolute fundamentalist movement was a reaction to modernism and a retreat to the “fundamental truths” in the written bible. Some scholars would see pre-1962 Catholicism and Orthodoxy as fundamentalist Churches, too and the Society of St Pius X would be a good example of Catholic fundamentalism. What is written down cannot be wrong or interpreted in any other way.

The problem with Fundamentalism and Christianity is that Jesus spoke Aramaic, the Christian Bible was written in Greek, translated first into Latin (the Vulgate) and then into english and other languages at the Reformation. The acceptablity of the books of the bible were decided by councils in the early Church, and as Dan Brown so cleverly (!) explores, there remain copies of some texts that did not get the approval of the Church. Some of the “Apocryphal” books however circulated along with the canonical books and provide for instance all the exciting details of the Christmas story which are found in Greek icons and in Giotto’s frescoes- the ox and the ass, and the presentation of the virgin in the Temple (The Gospel of Pseudo Matthew and the Gospel of the Nativity of Mary). The ambiguity of what was and was not canonical was resolved by the Church. The only way that Protestant Fundamentalism can survive, therefore, is by a careful use of Greek and Hebrew texts or by claims that the English text was itself the subject of direct divine inspiration. This obsession with ensuring the correct texts led to the collection of some of the most important and antique manuscripts but these manuscripts highlight the fact that a single word can change the meaning. They also make it clear that we should never confuse antiquity and authenticity. The two words are certainly not interchangeable when it comes to the study of Christian texts.

As the Twentieth Century developed, Fundamentalists took on some of the more Right-wing political campaigns of America, and there are some, for instance, who see the establishment of the State of Israel as an important political event because it ushers in the final age.

Islam, in contrast to Christianity developed very quickly and the Koran was a complete text at a very early point in the history of the Religion. There has been very little debate about what texts in the Koran are correct and indeed how they should be understood. In this way, Islam is by its nature a fundamentalist religion. To talk about “islamic fundamentalism” is therefore to talk about Islam in General.

But two major developments in Islam happen towards the end of the 20th Century. The first is the power of Wahhabiyism (and its possible link to people like Ayman al-Zawahiri) and the second is the role of The Ayatollah in Iran and the way he “interpreted ” Islam to respond to a specific political situation.

In the 1960s, the Ayatollah Khomeini was exiled to France for 17 years and was exposed to Marxist political ideas there. For him, then, the 1979 revolution was not about a return to “fundamental” principles, but about a rejection of the West and an alignment of Shi’a Islam and iranian nationalism with Shia clerics taking an increasingly political role in the running of the Nation. (Nation-hood is a modern concept) In addition, the concept of “Istishhah” or martyrdom, takes on a nasty interpretation during the Iran-Iraq war and, of course, later with 9/11. Ayatollah Khomeini declared Mohammed Hossein Fahmideh a national hero for his suicide bombing of an Iraqi tank in November 1980. Fahmideh is generally recognised to be the first suicide bomber. Khomeini’s is a serious interpretation, or frankly a reversal, of the very clear condemnation of suicide by the Prophet and in the Koran. (2.195 and 10.56) “Do not throw yourself into destruction” and “It is HE who giveth life and taketh it…” This incident alone is enough to make it clear that whatever term is used to describe the Islamic message put forward by Khomeini, “fundamentalism”, a belief in the literal truth of the written text, it most definitely is not!