While Britain focuses on the EU referendum, a meeting is taking place (or not) in Kolymbari, Crete that has taken about 1000 years to negotiate and this specific effort dates back to 1901. Far from pursuing Church unity between Rome and Constantinople, it is fairly evident that unity across the Orthodox Church of 14 autocephalous Churches can be fairly fragile itself. 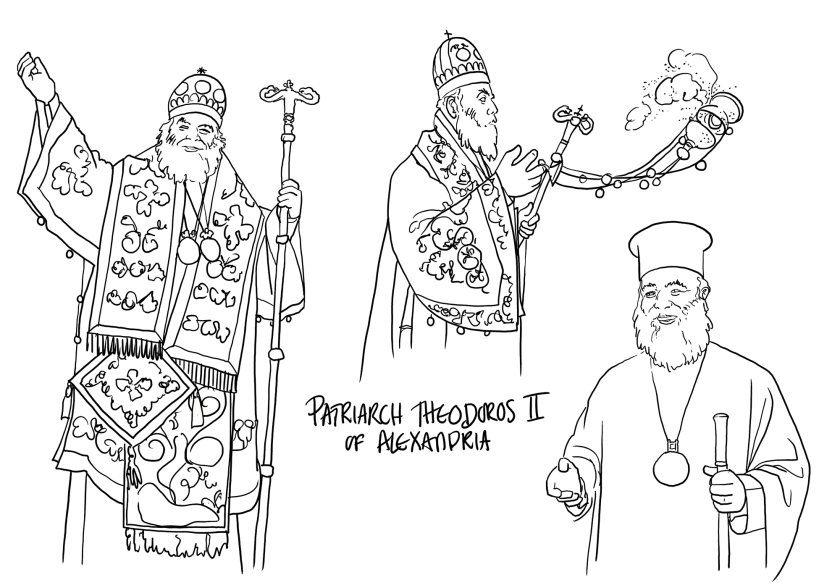 Yesterday, Theodoros II urged the squabbling Bishops, led by the Bulgarians, to set aside differences and attend the council. The Serbians responded by saying they would attend, but they might not stay. The Russians remain determined to boycott the event.

As I see it the reasons for the boycott are fairly spurious- issues about primacy of honour in the conference itself and in any pronouncements thereafter issued, as well as a general prickliness about orthodox links with other churches, particularly Rome.

The issues causing problems are really an excuse to promote the power of Moscow and the objections put forward by the smaller Churches like Georgia seem to have been orchestrated to make the point. While the Antiochene Church may well have a valid dispute with Jerusalem over control of parishes in Qatar (they should both be focused on Syria frankly), issues like “Church unity”, and intermarriage had already sparked concerns among the conservatives in Moscow. Kirill was also, I gather, worried about the prominence given to Bartholemew in seating arrangements at the council. This analysis tends to suggest that Moscow is absolutely the villain of the piece but there is a long history of Greece exerting control (most of the hierarchy throughout the middle east is bizarrely Greek, and has been so for many years). Squeals of theological protest from Athos and from what is mostly a group of ultra-conservative converts, have kicked up a fuss. Georgia, meanwhile, which worries that documents dealing with inter-marriage are too progressive and might cement in practice what has  so far been a “don’t tell” policy of tolerance, and Bulgaria’s decisive withdrawal gave an excuse for Moscow to withdraw too. How much their withdrawals were orchestrated by Kirill will remain to be seen.

Behind this jockeying for power is a nasty undercurrent. If, following rules laid down by the Turkish government which stipulate the Patriarch must be a turkish citizen, Bartholemew is to be one of the last Ecumenical patriarchs of Constantinople (with a flock of barely 3000 believers), the Moscow Patriarch clearly has its eye on the job. 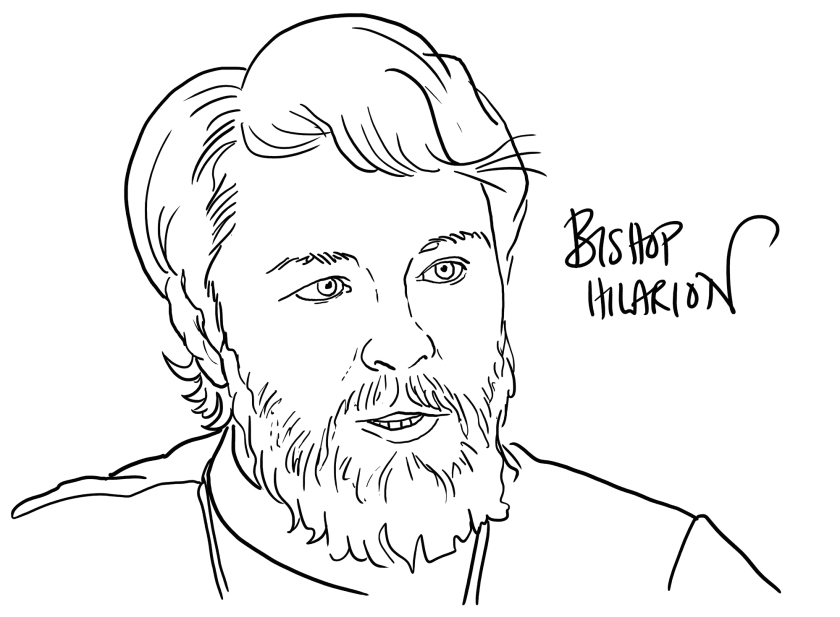 (Either Bishop Hilarion fails to do his job or is not allowed to do so. I hope the latter is the case because I like him!)

In brotherly love, while with responsibility and hopes preparing for the participation in the Holy and Great Council of the Orthodox Church, which, God willing, is to be held at the Orthodox Academy at Crete around Pentecost, from June 17 to 26, 2016, the Holy Synod of Bishops in its broader composition at its session held at the Serbian Patriarchate in Belgrade, on June 15, 2016, regarding the situation created after the ordinary convocation of the Holy Assembly of Bishops of the Serbian Orthodox Church, takes the following decision:

First of all, having in mind the importance and significance of the Council, our Church wants, in a spirit of ecclesial upbuilding, to contribute to this Holy and Great Council fulfilling the criteria and the measure of true Councils in the history of the Orthodox Church, thereby justifying its title.

On the other hand, our Church requests that problems and matters not only of the Serbian Orthodox Church, but also of the other most Holy Churches that cancelled their participation in the Council, be considered at the Council.

At last, our Church insists that the gathering on the island of Crete be the beginning of the Conciliar process, that the matters in question should be solved during its working process, but in the spirit of the conciliar tradition of the Church of Christ.

In the case that the Churches present at the Council, with the Ecumenical Patriarchate at its head, persist in the position that the absent Churches boycott the work of the Council without any real reason, and in the case that the already present Churches refuse to take into consideration all the matters in question, problems and disagreements, the representatives of the Serbian Orthodox Church at the Council will be, regretfully, forced to leave the sessions of the Council and in that way join the Churches that are already absent.

This is by no means a threat or ransom, but a consequent implementation of the position and decisions of the Holy Assembly of Bishops of the Serbian Orthodox Church held in May 2016.

In the spirit of our ecclesial and pastoral responsibility, we present these positions hoping in the illuminating action of the All-Holy Spirit.

Archbishop of Pec, Metropolitan of Belgrade – Karlovci
and Serbian Patriarch
President of the Holy Assembly of Bishops
sign.   I R I N E J 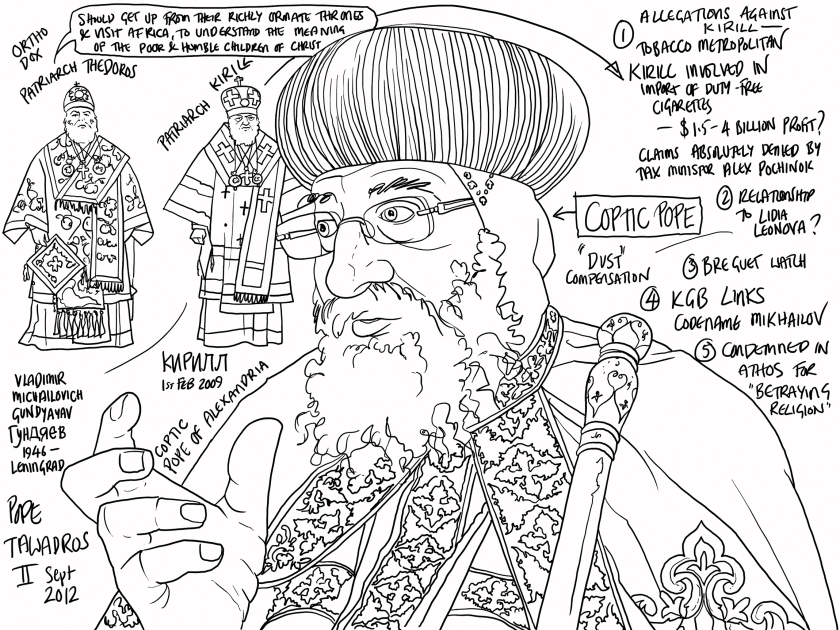 This all seems a bit unfortunate. Bulgaria is simply following the lead of Patriach Kirill in Moscow, whose background is almost as dodgy as the late Christodoulos of Athens. Neveretheless, I hold out some hope that Bishop Hilarion, who was at Oxford, will hold sway over the Muscovites and they will finally come round to sense. At the moment, he is urging postponement but as another member of the council pointed out, there is not really anyone with the authority to call off what was agreed by “all churches” in January. “It would be autocratic and papal for him (the ecumenical Patriarch, Bartholomew) to change that. No one, including the Ecumenical Patriarch, has right to override that decision.

“There have been councils in past attended by very few bishops or churches, because of various circumstances,”Chryssavgis said. “This council will be the largest, most representative council in the history of the Orthodox Church.”

“In that respect,”Chryssavgis said, “it truly is a ‘great’ council, greater than any individual synod of one of the sister churches.”

I note that one of the signatories to a letter urging union and specifically “To postpone the Council once again,” they tell participants, “is to fail to live up to the principle of conciliarity on a global level.” is Dr Smilen Markov, Sofia University (Bulgarian Orthodox Church).“It is a great council, a pan-Orthodox council whose decisions are binding for the Orthodox Church,” said Deacon Chryssavgis, theological adviser to Patriarch Bartholomew.

An analysis in Greek (but with english subtitles). I am indebted to Fr Nikolas Young for pointing to this!

Metropolitan Kallistos of Diokleia speaks  about the coming Holy and Great Council here,