A few days’ ago, a US court sentenced the Boston bomber to death. While I have no doubt at all that he is guilty, I question the sentence he was given because in the 21st Century, a country like America should be setting a better example.We look up to the US as a land of Freedom, democracy and liberty.

The death sentence is the justice of revenge. It is out of place today. It should be abolished in the 32 US states where it is currently practiced. The morality of Capital punishment is one thing (and I think it is fairly straight-forward), but it also eats up huge legal fees and clogs up the court system as inmates contest the process and linger on death row for years. The Financial costs to taxpayers of capital punishment is higher than that of keeping someone in prison for life. It also invites sympathy for the criminal who dies.

It is almost 50 years since Ruth Ellis (last woman), Peter Anthony Allen and Gwynne Owen Evans (the last men hanged in the UK)

It is almost 50 years since the last person was hanged in the UK. The death penalty was abolished for murder in 1965, though it had already ceased to be automatic and in most cases the death penalty was formally abolished in 1969. I think there was still a spurious death sentence lingering for High Treason and this was formally abolished in 1998 under the Crime and Disorder Act. Oddly, decapitation remained a form of execution on the statute books in the UK until 1973. Despite this, though, the death penalty remains in many countries. It is a permanent record of what the Courts have decided. It cannot be reversed. It has often been wrong, but more than that, it is a statement of desperation by the State and smells of bitterness and aggression. This is not the way to do justice. Already, there are undertakings to abolish the death penalty in Albania, Cambodia, Mongolia, the Gabon, Kyrgyzstan and even Russia (indefinitely suspended despite pressure to reintroduce it to fight extremism), yet the US retains the right to dispatch whoever it judges guilty. We can hardly criticise Saudi Arabia, for instance, when the US blatantly does the same thing- and cannot even appeal to the Divine sanction of sharia law!

No. America must stop, and then we can appeal for clemency elsewhere.

the European Convention on Human Rights

The European Convention on Human Rights, in line with a 2007 UN resolution that called for a Global moratorium, firmly opposes the Death Penalty and while the UK remains signed up to that convention, there is no chance that it will ever be reintroduced in Britain. But the Convention is under threat. I do not, for one instance, think that a man like Cameron would even consider restoration of the Death penalty, but I fear Farage might, and who knows how brightly the Farage star may be shining in 20 years as he continues to lead his people’s army from the gates of Vienna towards the gates of Number 10.

Today, in the US alone nearly 3,000 linger on death row. Included in this number now is Dzhokhar Tsarnaev. 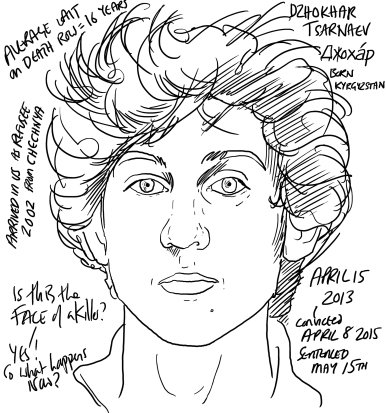 And though it gets harder and harder to do the job, the US seems determined. In 2011, the pharmeceutical company Hospira bowed to pressure from Italy to stop producing the anesthetic sodium thiopental which is part of the cocktail of drugs routinely administered in US execution chambers. Today, the EU has banned the export to the US of any medicines that might be used as part of a lethal injection system. This might be behind Utah’s decision to abandon the lethal injection in favour of the firing squad. Shades of North Korea, there I suppose! Since 2009, 1,193 people have been executed in North Korea, though admittedly, only a few have faced anti-aircraft fire or flame-throwers. But many have been executed in public. It is barbaric maybe, but it is only 150 years since execution was regarded as a public outing in the UK.

The North Korea example is important because it demonstrates that justice is not always fair while the death penalty is irreversable. Apparently, people have been shot for making international telephone calls, for possessing a South Korean Bible. We cannot give politicians, however successful they may or may not be at the ballot-box, or public opinion, however whipped up by the media it may become, the opportunity to do this in Britain. The EU Convention is a moral safeguard- it would be better to reform the Convention than abolish its rule here in the UK.

One thought on “Death is not the answer”