Palmyra or Tadmor was a place famed for barbarity and splendour. And history has so far seen fit to preserve its architectural merits lest we forget. It was a place of astounding progress and beauty. I remember a friend had a girlfriend with the improbable name of Zenobia. She was named after one of the great queens of Palmyra who led an invasion against Rome at about the same time Russell Crowe was fighting in the arena in Gladiator I think.

Personally, every time I read CS Lewis’ first Narnia book- or the first one chronologically, “the Magician’s Nephew”- and every time I read the chapter set in Charn, I think of Palmyra’s desert landscape and majestic, yellow columns. I am afraid if ISIS has its way, it will be more like Charn than ever.

The city itself was inhabited in some form until early in the 20th Century when the border arrangements negotiated at the end of the 1st World war made it possible to move inhabitants into a nearby village and begin archeological excavations in earnest. What emerged was wonderful though this is today threatened by the seizure of ISIS.

Palmyra preserved a prosperous society that was on a crossroads, was famed for its peculiar mix of Aramaic and Greek, a city at one end of the silk road, probably the last great stop on the caravan trail from Uzbekistan to Istanbul or conversely, the first great stop on the road to Samarkand.

Before ISIS, many people claimed ownership of Palmyra, not least King Solomon, (in arabic and the Koran, Suleiman or Sulayman regarded as prophet and king) who supposedly fortified the city (2 Chron 8:4). In Islam and Judaism, Solomon is presented as an icon of Wisdom. He was also the husband of many wives…Anyway, when it comes to the later Jewish writings, there was certainly enough intermarriage still going on in the post-biblical period for Tadmor/Palmyra to be singled out in the Talmud. 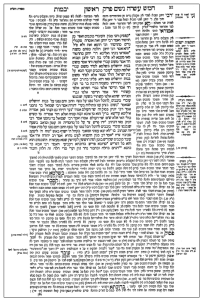 A mamzer is a child born to a gentile man and a jewish woman. While thoroughly Jewish, the child faces some limitations in terms of marriage. (the Talmud, incidentally assumed that Jesus is a mamzer, the son of Miriam and a roman soldier probably called Pantira. It might explain the tradition that Jesus was unmarried in a society where all men were married off routinely) The talmud (Yevamoth 16, a-b, which deals mostly with marriage laws relating to close relatives) worries about accepting converts from Palmyra. It worries specifically that they may be children of the former slaves of Solomon or that they might be “daughters of Jerusalem”, descendants of those girls seized by the assyrians and taken into exile. I am not sure how this section should best be interpreted – that these people do not need to convert because they are inherently Jewish seems the most probable understanding. But it helps to colour the image of a city that lay on a crossroads and had its own multi-faith society.

One of the giants of Palmyran society was Odaenathus, or “little ear”, a puppet king in the final days of the Roman empire before it moved on to Byzantium. He was already using the title “King of Kings” and had he not been assassinated may have had plans on the Imperial throne in Rome itself. Zenobia was his second wife.

Why destruction is wrong

Today, very few people have seen Palmyra- neither the little town that has grown up around the ancient ruins, nor the ruins themselves. And what is worrying now is that few will ever again see Palmyra. Should we care? Indeed we should! Not just because of the intricacy and brilliance of the architectural decoration, but also because we should never smash and destroy those artifacts we do not understand or just because we are annoyed with other people. That way is a temper-tantrum worthy of a spoilt child. The wanton destruction, indeed, done in the name of ISIS is actually against all the traditions of Islam which saw in the early centuries the careful collection of pagan texts from Greece and India and their translation into arabic- this fused ideas and gave us modern Mathematics as well as the kickstarter to the Western renaissance. What Islam has always done best is to appropriate and convert whatever it finds. This is how the Church of Agia Sophia survived till today by plastering over the mosaics and by adapting the existing building to the needs of a new Religion.

By studying and appropriating the architecture of Agia Sophia, the great master Sinan was able to develop the blueprint for the modern Mosque. The destruction of history in Syria and Iraq, in contrast, is just another demonstration that ISIS is an heretical manifestation and Islam needs to hurry up and- as a world-wide community- condemn terrorism for what it really is. It is brutal, destructive and thoughtless.

Some examples of Persian/etc miniature depicting Suleiman, Prophet and King: 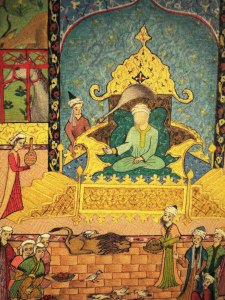 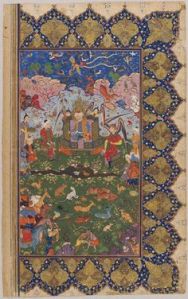 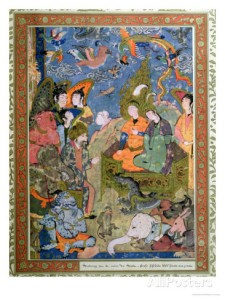 But Palmyra is even more important- it was built on the orders of a Koranic prophet سليمان Solomon or Suleiman, a divinely appointed Monach, a man who tradition tells us ruled the Jinn and also spoke to animals, a man who, above all, was faithful to God throughout his long and prosperous life- Sura: 27:15 – it is not right to destroy what the wisdom of God has given to us. The wisdom of God in Greek is Hagia Sophia, the name of the Church that was converted into a Mosque in 1453 and is now a museum in Istanbul.

Challenge
If Palmyra was indeed built on the orders of King Solomon, a man venerated in all three great religions, Christian, Jewish and Muslim, it is probably best to preserve what in wisdom he commanded to be built or at least to be protected. It is a challenge, then, with their history of iconoclasm, to see what ISIS intends, for if they destroy this site, then they are destroying something that was protected by a prophet, a great architectural work inspired by God-given wisdom. Can ISIS dare to be greater than Solomon in all his glory? I wonder.