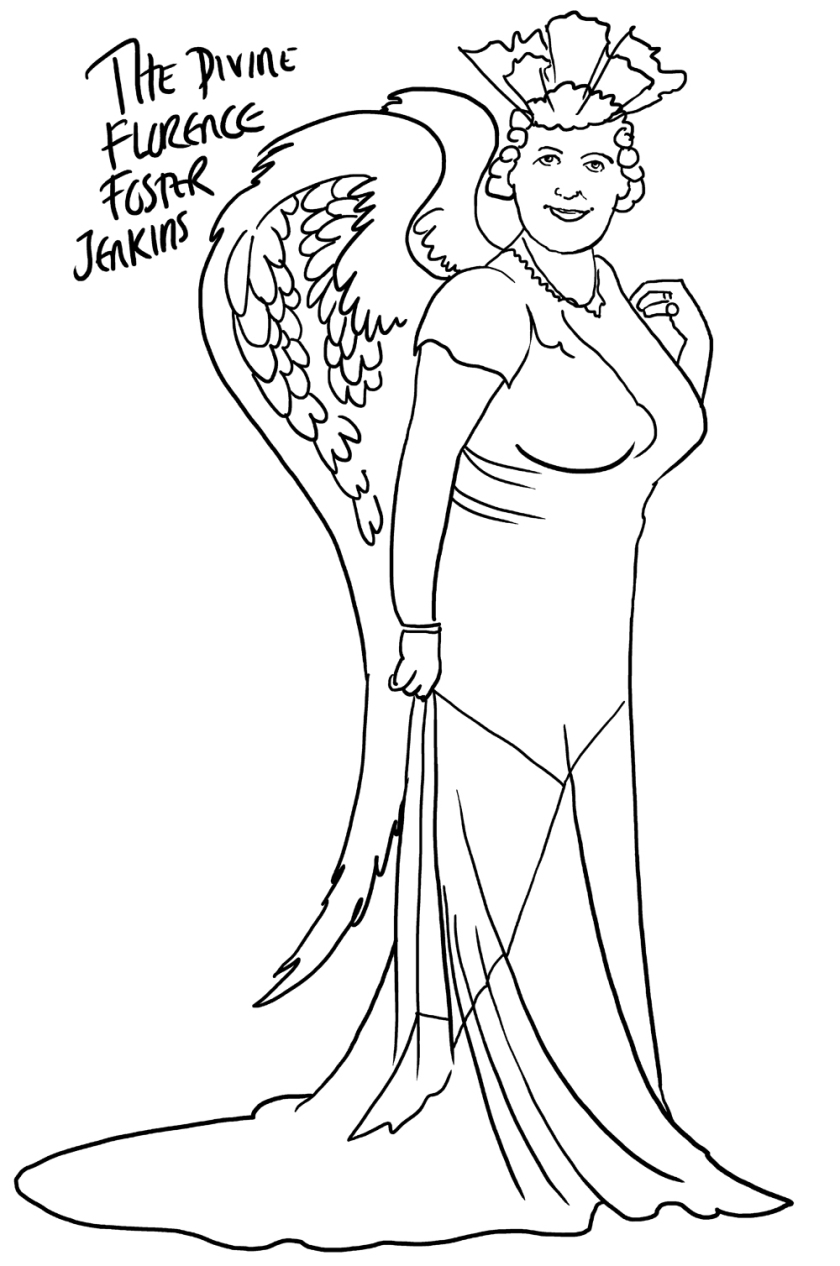 Just to point out- I have not yet seen the film though it strikes me that Hugh Grant looks more like the pianist Cosme McMoon than St Clair Bayfield! I await the film with great joy! But I wanted to scribble a few thoughts first about Florence Foster Jenkins whose image I recall from reading about her in “Look and Learn” in the early 1970s, but whose voice I first heard when a friend called Gerald Dowler showed or gave me the record. It was a great pleasure. Even more so because on the flip side was a New York cabbie destroying Faust.

La Jenkins was supposedly “the worst singer of all time” (“Her singing at its finest suggests the untrammelled swoop of some great bird,”) and she drew crowds from the 1920s until her famous debut at the Carnegie hall during the 2nd World war.

“She clucked and squawked, trumpeted and quavered. She couldn’t carry a tune. Her sense of rhythm was uncertain. In the treacherous upper registers, her voice often vanished into thin air.” She had a heart attack two days after the show and died.

She was certainly eccentric, confident, hopelessly pursuing a fantasy of herself, a camp  stylist with a vision that was entirely her own, and she remains an inspiration to anyone who follows a dream.

I love her determination. I am sure she would have done much of what she did even without her escort, “Whitey” St Clair Bayfield (who called her “Bunny”). She was disowned by her father after she ran off with her first husband Frank Thornton Jenkins. Frank gave her syphillis so when her hair fell out and she was forced to wear wigs. Then she badly injured her arm and could no longer play the piano. Still, she did not give up. She was supported by her mother who encouraged her daughter’s pursuit of music and society.

She may have been practically tone deaf, “the queen of dissonance”, but she had guts and determination: her line was, “people may say I can’t sing but no one can ever say I didn’t sing,” suggesting she was more aware of her failings than the stories suggest. She also had inherited buckets of money and while pursuing her own benighted career, promoted others, and, for instance, put on a series of privately funded and fully staged operas for the Euterpe Club in english during the 1st World war often in Hotels; she continued to patronise the arts generally through the Verdi club.

The picture is after one of the photographs of her in a costume she had designed especially for  her to perform “the glory of the human voice”.

here she is crucifying both Bach and Pushkin and finally the Queen of the Night::

One thought on “Florence”