In the late 1950s, Ratcliffe College, my former school, decided to build a new chapel to replace the 1867 chapel financed by Ambrose Phillips and the Earl of Shrewsbury, and designed by Pugin who was the architect for the original building in 1844, his son Edward and the men who patented the Hansom cab (JA & CF Hansom). Pugin was the chief and largely uncredited architect of Parliament, the Palace of Westminster. Because he was a Catholic, his name was largely overlooked and Barry got the credit. But since 1847, it has been on a throne (built by John Webb) designed by a Catholic architect that the monarch has delivered the “Gracious address”. 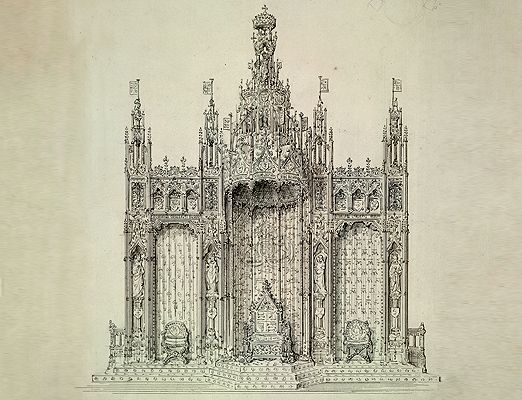 The new chapel, imagined in the “modern trend with basic Byzantine feeling” by Ernest Norris took two years to erect and was completed in 1960. Much of the interior was embellished with painted ironwork decorations done by Gervase and Aloysius Duffy, and with windows by Jonah Jones. The sculptures were done by Jones himself and Fr O’Malley, with two of the statues- of St Chad and St Richard modelled directly on headmasters Emery and Leetham in the style of Eric Gill, one of whose statues remains in the school. Fr Claude Leetham had a habit of rubbing his nose, and in the days when the statues were parked in the cloisters waiting to be put on-site, the boys paraded past St Richard and rubbed its nose, leaving a small mark which persists. (This story passed on by a boy who was there at the time and went on to be a priest in my day at the school). It remains a fairly impressive space, constructed of concrete, clad in brick and with a dome over a chunky clerestory. Vertical windows in the transepts make it, nevertheless, a very airy building.

The original chapel was deconsecrated in 1962 and used for teaching and dormitory space.

Ratcliffe’s association with great architecture extends also to the prep-school- the current in-house prep-school has just been built by a distant Pugin relative and the original at Grace Dieu manor is described by ES Purcell as “the beautiful parish church (which) underwent restoration at Pugin’s hands, the first of the old parishes to be restored upon Catholic lines with return stalls and a rood screen.”

But when the school was handed to lay-staff and the Rosminian Priests largely withdrew, a number of items went missing. This following the destruction of the baldacchino by the last Rosminian Headmaster, Fr Keith Tomlinson, who always seemed to me to be a philistine, albeit a slightly camp one, with a remit in my day simply to beat boys. I know he made alot of children miserable. No doubt he was Ratcliffe’s own John Smyth. He is probably best forgotten. Nil nisi bonum and all that, but there we are!

The Baldacchino was quite remarkable in many ways. It provided a focus to the design, which had been compromised when the then Bishop of Nottingham, Ellis, himself an Old Ratcliffian, ruled that the planned central altar “versus populum” was non-canonical, only months’ before Vatican 2 recommended exactly that sort of arrangement and which was, of course, followed in Liverpool cathedral. Ellis, though, was old fashioned and my own parish in lincolnshire continued to have services in Latin and “ad orientem” until the early 70s, some 10 years after the end of the council.

The Baldacchino (which is in this photograph and -somewhere there is a drawing I did which will resurface again sometime- I keep coming across it and will post here the next time  I do!) was an interesting modern take on a traditional architectural feature in the Latin Rite going back at least to San Apollinaire in Ravenna in the 9th Century, though we know that Constantine gifted a silver baldacchino to the Basilica of St John in Laterano. By 1600, it was considered a mandatory item, sometimes replaced by a cloth tester, promulgated by the Counter reformation in 1600 and indeed there is a good example in stone by AW Pugin in Grace Dieu.

Ratcliffe’s Baldacchino was also supported by 4 lightweight columns crafted from spitfire metal in the old Coventry factory where the planes were manufactured during the war. Today, Steve Clark has been overseeing the restoration of a spitfire for the school. Again, a link lost. The design on the baldacchino was based on an obscure verse “On Baptism” by Tertullian – “we are little fish who cleave to the great fish Jesus Christ”, this all as much a play on the Greek Christian acrostic ΙΧΘΥC as on the trade of the early apostles. One little fish was actually named on the painting- he was a boy who had just been baptised in the school. On every level, therefore, this was heritage stuff and it was, I understand, dumped in skips by Tomlinson. Simply appalling vandalism.

Opposite the lady chapel, and under the organ pipes were two alcoves. On these had been hung a giant rug designed and woven by AW Pugin. This, even in the 1960s, should not have been cut in two and should have been housed in the V&A! Today, I believe it was unceremoniously stripped from the church and transported to the Rosminian motherhouse in Stressa. (Maybe the rather splendid gold-plated silver pontifical chalice, which I persuaded the then Headmaster Fr Anthony Baxter to use on the school feast-day, went the same way?) and I wonder if an export-licence was either sort or acquired before British heritage of this quality and import was taken to Italy? The Pugin rug, as valuable as any of its sister-pieces found in the Palace of Westminster, was used on the sanctuary for services from the 19th Century through to the 1960s. It was a bigger version of the rug routinely used by a Bishop in the Orthodox Church. Norman St John Stevas, also an old boy of the school, and the person who devised the committee system used in Parliament, at least, would have been apoplectic. Thank God he died in ignorance.