This is the second interview as it appeared on HTB (NTV)

There is a problem here – specifically that the words I am supposedly saying, dubbed by a Russian actor, are not in the original interview.  The previous interview that I did before Christmas about a children’s tv series called “Masha and the bear” was equally questionable- but when I asked to see the original footage, I was told this was not possible, and I was assured that the words dubbed were an accurate representation of what I said. In the case of this interview about Brexit, however, the entire interview was also filmed (though not by me) on a mobile phone so it is possible to compare what I actually said with what the tv station felt was convenient for them to broadcast.

There were by their own admission other complaints about the dubbing. I was invited to meet Ms Zeynalova and members of the senior management of the station last week. In the event, I went up to the studio, went through a barrage of (last-minute and quite excessive) security to have tea in a staff canteen with an editor, a charming lad called Andrey who promised to arrange a further interview to correct the station’s errors. So far, nothing has happened. There has been no written apology, and no explanation on air and of course the proffered meeting with senior execs has still not taken place. I wonder whether this sort of thing (what might be called “deceptive dubbing”) is therefore accepted as standard practice. It beggars belief.

I will add to this and post further images and details over the next few days. 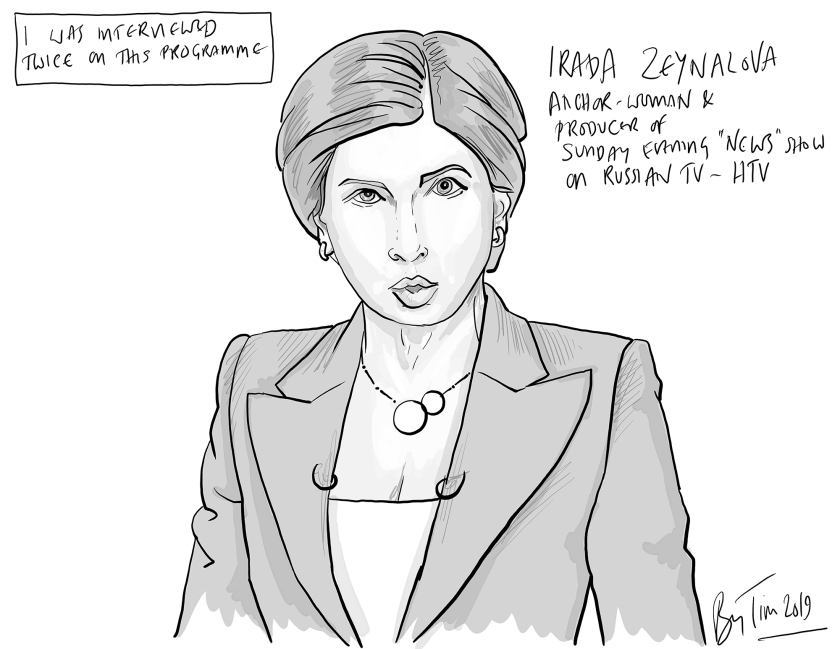 This is a translation of what NTV claims I said, “She even put her neck on the line by saying that she would if the plan was supported, even this didn’t help. Look at it from a different angle. She planned to be another prime minister from the ruling party, after Cameron who did nothing and just went to watch from the side as the county crumbles”

This is actually what I believe I was saying to coincide with the visuals (I take this from the recording made on a phone at the same time and now posted elsewhere on the internet): “She said she was going to resign if she gets the deal through. It’s an extraordinary thing to do to say if I’m successful, I will resign. And if that’s the deal she’s got to do, well, I understand it’s been successful and people are already lining up to compete for the next job of leader of the conservative party, therefore leader of the country and prime minister. It may have had a negative effect because the labour party detests the thought that there could be an even stronger leave voter in place to lead the country after Mrs May goes.”

Here is the original footage:

2 thoughts on “HTV in Russia- standards of reporting”