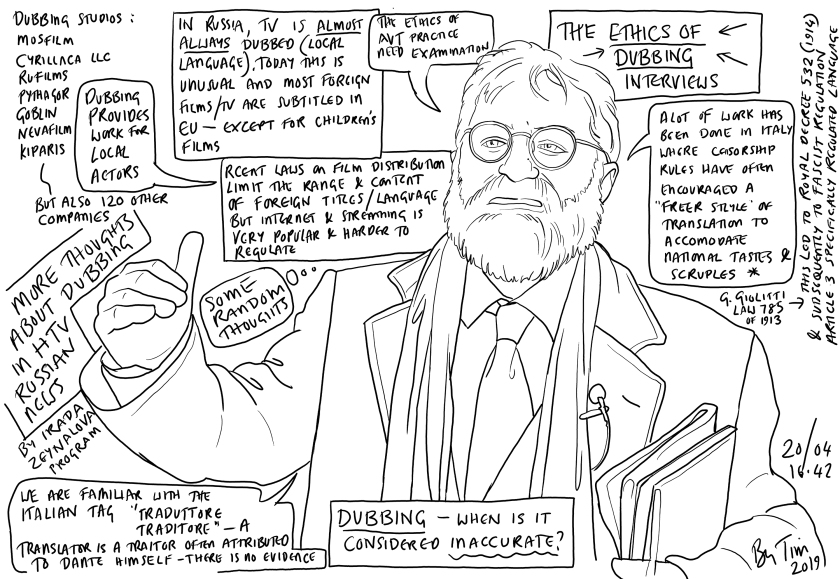 On the plus side, there is clarity and employment to be gained from dubbing foreign language films and reports. A familiar voice is often more immediate than hearing someone speaking another language. Also, the whole dubbing industry provides work for needy actors as well as translators: it is an industry in itself. The simultaneous translation services provided in conferences and routinely at the top levels in diplomacy and in the UN and EU foster some of the best practice and ensure that what is said by someone in one language is understood as far as possible in the way that it was intended.

The Italian film industry has a long record of dubbing films and later TV shows for broadcast on local stations throughout the country. In the 1960s and early 70s, the multi-lingual film sets of Visconti, Bertolucci, Pasolini and Zefirelli made good use of the traditions of dubbing, and effortlessly rendered Burt lancaster and Dirk Bogarde into Italian. Indeed, I remember seeing “jesus of Nazareth” on a church door in Naples in Italian. Laurence Olivier sounded particularly smooth. Many of the tricks these directors used are still the basis of directing animated dialogue, hitting the beats of the original text rather than trying to slavishly copy the sounds and shapes of the true mouth movements. In the end, it is an illusion that the audience gladly accepts. Of course, those of us growing up with Heidi and White Horses in the early 1960s will remember some very oddly detached dialogue dominating the schedules every weekday just before the evening news. And then there is “the Magic Roundabout”…

“The magic Roundabout” is remarkable for its cavalier approach to dubbing. It was creative with its story-telling, often moving wildly away from the original and ensuring that the humour of the french visuals was matched to a thoroughly British soundtrack. While this might have worked for Serge Danot, it owed alot to the skills of Eric Thompson (Emma’s father) and, indeed, the series that began on French ORTF in 1964 was originally rejected by the BBC as too “difficult to dub into English”. The Thompson ruse owed alot to the fact that Ivor Wood, who went on to make the Herbs, Wombles and Paddington worked with his french wife Josiane on the original series together with Danot. The english version, therefore, sprang from the artistic forces that created the series in the first place. Almost certainly, by the 1970’s, I think some of the french plots must have been constructed with an eye on the likely British narrative. 441 original episodes were aired with Thompson’s anarchic text by 1977 and a further 51 were dug up in the early 90s and narrated by Nigel Planer.

It is more worrying when the freedom of “the Magic Roundabout” is introduced into factual programmes and basic reporting. It allows, of course, for a foreign TV station to air a text that might be better-phrased than the original, and might preserve what was intended by the original speaker, but equally, there are three more disturbing options: firstly,  it is an opportunity to drop an editorial gloss surreptitiously into a programme; secondly, there is a chance to distort the sense of what was originally said, and thirdly, there is an option for the producer to introduce an entirely new idea. This seems broadly deceptive and it is far removed from the whimsy and good nature of “the Magic Roundabout.”

In many countries where news’ reports are dubbed, it is possible to hear the original words behind the added vocal. This seems very sensible and offers a bilingual viewer the chance to compare. It is transparent. The same is true about subtitles. Of course, there are instances when legal rules or security dictate that the words used “are spoken by an actor”. But again, one would trust the actor would pace the new text to match the original. In my experience of being interviewed and recorded for Russian TV on Irada Zaynolova’s news’ programme particularly, two features stick out: the first is an insistent orchestral beat that, together with a slightly manic presentation by Zaynarova herself, suggests a continual state of anxiety. Accordingly, I have been very measured and calm in what I have done for her. The second is that the dubbed voice is so loud, it is impossible to detect anything of the original. 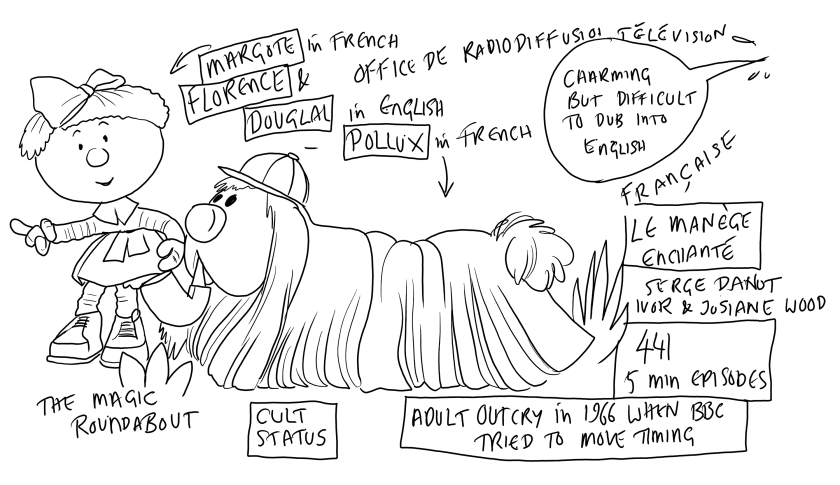 2 thoughts on “More on the ethics of Dubbing”