Nasruddin was the figure in the Richard Williams film  that I discovered in the early 70s. The film changed completely when it became the “Thief and the Cobbler” and the Nasruddin character disappeared. There are various stories about why this happened. Last Sunday Williams simply said that the original story and the original character did not work. Nasruddin, however, is still visible in a crowd scene riding on his donkey (which he rides backwards)… here are some drawings of statues in Turkey- one faintly comic and the other more respectful. He was a real character but he used humour and his stories are laced with unexpected incident and comment. however, Nasruddin turns up in Turkish legend as Nasreddin Hoja and then again in Albanian as Nastrudin Hoxha. I don’t know whether it is more appropriate to see Nasrudin as Turkish or Iranian: the oldest manuscript from 1571 suggests he was Turkish or active in Turkey. When we made the first version of “A torture Cartoon”, it made sense to add a version of Nasruddin because Necati is Turkish

and then later when we did “how to be Boss” we did a new design and told one of the many Nasruddin stories. You can find the sequence at about 2.39: “Have you told your wife who is boss in your own house? Don’t worry. She knows!”

There is a Pappas illustrated edition of stories which I would love to see. Otherwise, the best editions are those illustrated by Williams himself and the spectacular Errol le Cain 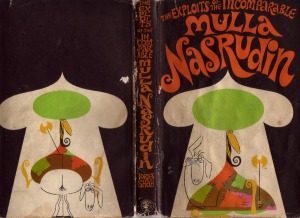 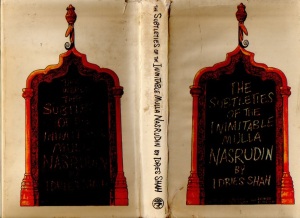 Here is a link to the “what is bread?” section in what is left of the Williams film with Kenneth Williams’ voice:

It is simply delightful to listen to Kenneth Williams, and Richard Williams version of Nasruddin is so elegant. The Williams character should be spelt “Nasrudin” of course. Apologies.