Firstly, congratulations to the Prime Minister of Luxembourg who was married yesterday. It is a few months later than planned, but well done anyway. I hope he and Gauthier will be very happy.

A little while ago, I ran a story about Nikolopoulos who criticised the Prime Minister in Greek on twitter which I am reprinting below.

What is he up to now

He is still in the Greek parliament (and actually part of the Governing coalition) and was voting a few days for educational reform. His basic point here, if I understand correctly, is that German should no longer be taught in Greek schools. This is what he says-

“The German language, for the past 20 years, has unreasonably been promoted and supported by the Greek state to an excessive degree in relation to others, equally if not more important languages at a global level such as Spanish, Russian, Arabic and Italian,” he writes.

“We must not continually complain of the burgeoning of one member state of the EU when we ourselves, without it being imposed on us, make the choice to support the transmission of the language, the culture, and the traditions of a people, who in general lines, have been proven to systematically harm our country and have opposed our legal sovereign rights.”

This is a man who represents the equivalent party in Greece to what UKIP stands for in the UK, the Conservative Independent Greeks, or ANEL (remember the correct vowel here). He is a bully who takes swipes at whoever he thinks his audience might enjoy seeing done down. He plays deliberately to the crowd and does not think of the consequences of what he says.

Like all bullies, when he goes too far, he is the first to cry foul. In October 2014, days after having upset the Minister for transport, (who defiantly said he was not a “wuss” and would not be so “threatened”), Nikoloupoulos sought public solace by claiming himself to have been threatened in an SMS that someone would cut off his leg with a chainsaw. So far, he appears to still have both legs.

And so far, regrettably, this nasty man remains part of the committee that oversees the detailed bailout terms and what to do with bad debt. The only positive thing is that Nikolopoulos’ position in the Greek Government is tenuous because of Syriza’s contempt for his homophobic attack last yera on Xavier Bettel. Accordingly, while he remains the leader of ANEL, it is Panagiotis Sgouridis who got the Cabinet position as Vice Minister for Production Reconstruction, Environment and Energy.

Just a final point- while the Prime Minister and cabinet from Syriza were sworn in during a civil ceremony, the ANEL members insisted on the traditional religious ceremony which I know well from visiting the office of a ridiculous Pasok MP who had offered to see me, and when she realised who I was, pretended to be her own secretary. Around the walls behind her were dozens of photos of the religious ceremony that marked the beginning of a Greek parliament and there she was in picture after picture, fingers poised in the sign of the cross, very pleased with herself.

Religious imagery is not going to whitewash rogues. She should have known that and so should the people in ANEL. Poor Greece.

an ANEL MP, Nikos Nikolopoulos, has tweeted a nasty message about the Prime Minister of Luxembourg who has just announced his plans to marry his gay partner. The twit or tweet seems fairly innocuous in English: “From the Europe of nations, to the Europe of queers. The Prime minister of Luxembourg has been engaged with his special one!” In Greek however, “Από την Ευρώπη των εθνών στην Ευρώπη των πουσταριών. Ο πρωθυπουργός του Λοξεμβούργου αρραβωνιάστηκε τον αγαπημένο του!” The word “των πουσταριών” is particularly offensive, a derivative of the word, Pousti, street-language in Greek for “gay”.

The Prime Minister somehow heard of this tweet but, though he had studied maritime law and religion in Thessaloniki, did not speak enough Greek to know what was being said and contacted the MP, “Hello, I heard you want to tell me something, but I don’t speak Greek. Sorry” – now for the juicy bit that exposes the full rump of this silly man, Nikolopoulos. He said the message had been written by Kyriakos Tobras. He then modified his original tweet. What a twit!

Here are the two tweets. The understated graciousness of the second is such a contrast to the nastiness of the first.

Here is Nikolopoulos’s replacement twit (it is almost as bad but does not sound as “chavish” perhaps):

My own experience in Greece

I remember when I tried to register as self-employed in Athens back in 2001. I had been working for a company called Grivas which refused to pay me until I changed my employment status. Apparently, it was then impossible to do more than one particular type of job for any single company, and Grivas had me writing editorial, illustrating and recording vocals for their various English teaching materials, their decision, not mine. It was a horrible experience and a week of going from office to office in the then-labyrinthine bureaucracy was soul-destroyed. On the final day, with minutes to go before the tax office shut, I was asked for yet another pointless bit of paper. I am afraid I began to cry. At this point, the thug of a tax-manager started to assail me in Greek from across the room, saying that all english were “pousti”, and then listing (improbably but I remember this precisely) Thatcher, Blair, Clinton, as examples of gays in public office. This was about the time of the Monica Lewinsky affair. Incidentally, I knew that the man was the boss because he was overweight and had nothing on his desk save for a cup of coffee and a glass of water. Also, I knew enough Greek to understand what he meant, but I turned to the official next to me whose desk was heaving beneath paperwork and asked him what the word “pousti” might mean. “For example,” I added in my best Greek and as loudly as I could. “is that nice gentleman there who has so much to say about the english, also a pousti?” It shut the man up, and I got my papers quite quickly. I cannot recall if Grivas ever paid me what they owed. Probably not. Some of the other people working there seemed to have been driven to insanity and visits to an asylum in Dafni; others attempted suicide, taking a kitchen knife to their wrists. I know. I had to call the ambulance!  It was tough living in Greece back then! But also rather exciting.

I think I had found myself in the “wrong crowd”. There is certainly a “right crowd” in Greece. There was then and there clearly is now, and that crowd would wholly condemn Mr Nikolopoulos and all his fascist cronies, clerical and lay. I am very proud that I made good friends in Greece and that we remain in contact. Like me, they believe passionately that the “wrong crowd” is firmly on the way out, but like cockroaches, that wrong crowd takes its time going.

Here is a picture that was printed in the Greek newspaper eleftherotypia at the time- It shows what I looked like then!! (the article is about the shows that were on in the West End, and the closure of “Cats”)

I think Greece has changed

I had hoped that institutionalised homophobia was a thing of the past in Greece, but apparently not. It is a shame. The younger generation of Greeks, among whom I count many good friends, are shocked by the story of Niko Nikolopoulos. But he is a dinosaur and they need to make sure his political career is rendered extinct as soon as practically possible. I have a small cartoon for this story which I will post later: my computer is in general melt-down as I write this!

Meanwhile, my hearty congratulations to the Prime Minister Xavier Bettel and his partner, Destenay Gauthier who are to be married on January 1st. He is not the first openly gay Prime Minister in Europe. Iceland’s Johanna Siguroardottir and Belgium’s Elio Di Ruppo beat him to this!

A cartoon I did at the time

I think my computer is reeling from the absurdity of this story: Niko (Νίκος Νικολόπουλος) wrote something nasty about Xavier (Ξαβιέ Μπετέλ) and then said that it was really written by his friend Kiriakos Tobras (Κυριάκος Τόμπρας). This is all about a particular group of powerful men in Greece who are running around saying something like Δεν δέχομαι να προσχωρήσω στη λογική της γκέι ατζέντας (“I do not believe I have to accept the European Gay agenda”). This is a country which was eager to join the European club and when I was there, the EU Commission in Greece got me to illustrate one of the more absurd books I ever put my name to: “You are in Europe- Learn about Europe!” Some people, like Nikolopoulos evidently did not learn very much. 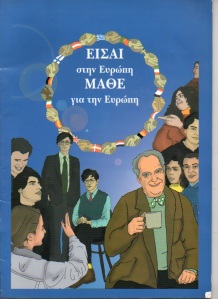 Europe has a liberal social image that promotes equality, friendship and assistance with better-off parts of the continent helping the less-successful parts. I know Europe as it stands has problems but it still remains a great ideal and was always clear about these aims even if federalism has crept in through some unwatched back door. I don’t really understand how a country like Greece which still boasts an island called Lesbos, and celebrates the history of Alexander the Great as well as the writings of Plato can possibly allow anyone to be championing such a ridiculous cause as this “we think there is a gay agenda” thing, especially when promoted in part by Churchmen who are civil servants*, that is, funded by the State. Truth is, of course, all this shouting and “tweeting” is done by only a minority of silly men with a complex, stirred up by a pile of pernicious priests. All of them should have better things to do. And, moreover, this story demonstrates how feeble these men can be: even when they are caught out, they are not honest enough to admit what they have done, or take proper responsibility for their own actions.

This is what Nikolopoulos is doing this afternoon. He is in Patras surrounded by Churchmen, so my cartoon (which drew links between him and the Archbishop of Thessaloniki) seems all the more pertinent.

*much needs to be said about the problems of having a “State church” especially when it thinks it has a right to vocalise about modern issues. I will write more on this!!

Modern Greece is not homophobic
Oh, and just to emphasise that modern Greece does not endorse this horrid racist thug, here are some responses from the days following the twitter incident:

Stefanos Livos said: “Not all Greeks are … morons like @NikNikolopoulos”.

Greek Deputy Foreign Minister, Dmitris Kourkoulas, tweeted: “@Xavier_Bettel Dear PM,thanks for helping us unveiling the dirty face of some of our ‘politicians’.”

Bettel himself replied by saying: “Relations between GR & LUX and with @PrimeministerGR are perfect and won’t be affected by the comments of an isolated politician”.

Nikolopoulos has spent much of the last year combatting a draft anti-hate law which will make the sort of attacks against homosexuality, that have been spearheaded by Golden Dawn, illegal.