Turkey has been variously criticised by the EU and pilloried in the recent Referendum debates, but as Ramadan ends, it has announced that over 3 million Syrian refugees are to get automatic Turkish citizenship: this goes much further than Merkel’s demands for harbouring returned migrants and it is a statement of solidarity with the dispossessed that should make the whingers in our own referendum debate hold their heads in shame. 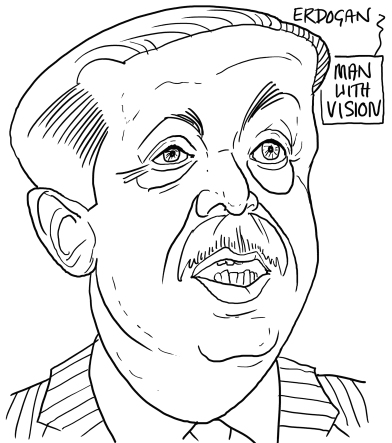 The care for victims of warfare is a feature of all three of the great religions that come from the middle east and it has been shocking how slowly we have dragged our feet while still whittering on about Christian values.

As Ramadan finishes tomorrow, therefore, we can celebrate with some satisfaction that at last there is a proper response.

More worryingly, there is news coming from Athens that former German Transport Minister, Peter Ramsauer, part of a delegation headed by the German Vice Chancellor, and already linked to allegations of anti-semitism, apparently told a photographer, I understand, both in German and in english, “don’t touch me, you filthy Greek”. I suppose his bilingual effort was to ensure no one thought this was an accidental bit of racism.

Peter Ramsauer is known to want to refuse Greek any further bailout money, and he is also famous for making a fuss, rather like the French have occasionally done, about borrowed english words used in modern german, so it is odd he should have translated his bilious comments, if indeed he ever uttered them. He went on to facebook yesterday to claim that he had said nothing. It is all the fault of the photographer “who later appeared to be obviously Greek” and who had pushed him. I wonder how this photographer can have appeared so obviously greek at a later stage? had he not appeared so Greek earlier? The good Dr Ramsauer would be well advised to avoid using the word “obviously” in all instances- as a rule of thumb, if something is “obvious”, it does not need to be mentioned and if it is not “obvious”, then the word is inappropriate.

I had dinner a few nights ago with a German minister who is married to a Greek. Both deeply charming! I wonder how Herr Ramsauer deals with that couple in the vaulted corridors of the Reichstag? The story of this exchange makes some of our own British bigots look positively cuddly.