Just two rapid paragraphs- the first about the odious deputy leader of the far Right Golden Dawn party. I discussed this in a post a few weeks’ ago about a Greek island policeman caught in a photo doing a nazi salute. Now, Kathimerini reports that the deputy leader has been coaching his children into giving the fascist salute, not only that- getting them to say “Heil Hitler!” at the same time. It makes it impossible for these people to turn round now and say that they were giving a “Roman salute” rather than a Nazi salute however absurd that distinction may have been in any case. There is a fuller review of this in Damian Mac Con Uladh’s excellent blog here: http://damomac.wordpress.com/2014/09/22/video-shows-golden-dawns-no-2-teaching-children-to-chant-sieg-heil/

The video link is here:

there is another here:

and here is damage recorded to foreign cars in Pireus: Golden Dawn was implicated in the attacks.

Here is a photo of the Golden dawn leader, Nikolaos Michaloliakos being arrested after the stabbing of rapper Pavlos Fyssas in Sept 2013: 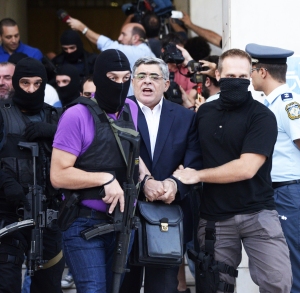 To his credit, Archbishop Ieronymos is also on record shunning Golden Dawn, so it is naivity rather than Political dodgyness of which he is guilty. This at least marks him out from his ghastly predecessor, Christodoulos

Today there is news of a rescue of Phones 4U workers. EE have offered some of them jobs and vodafone have also offered jobs taking over 140 of the retail outlets rebranding them as Vodafone stores. Indeed, in the press today, vodafone which originally put these jobs at jeopardy comes out smelling of Roses. Does it not make you sick!

The former owner of Phones 4U, John Cauldwell, who sold the company in 2006 for £1.5bn apparently told the BBC that the company had been a victim of “unprecedented assassination”. Vodafone has rejected suggestions that it acted inappropriately during contract negotiations.

Incidentally, at some point I must write about the Greek “watergate” scandal which involved vodafone tapping 106 phones including a number of government phones in advance of the Olympic Games. Kostas Tsalikidis, (Κώστας Τσαλικίδης) was the network planning manager who killed himself or was murdered- no one really knows- following the discovery of the fraud on 9th March 2005. He was found hanging in his apartment. There was no suicide note, no autopsy was conducted nor fingerprints taken at the scene. Vodafone kept his personal computer and personal effects. Regarding the wire-tapping, Vodafone spokesperson Ben Padovan says “We have never discovered anything like this before or since.” The key word in this statement is “discovered”.

6 thoughts on “Two updates- on Vodafone and Golden Dawn”